Dover: There were bright sunny skies with a high of 89/low 72 for Dover at the Green Turtle, where 74 people showed up in all different age groups for the 5K benefit race at 9:00 A.M. Saturday. In total, 58 were runners and 16 were walkers.

The benefit was hosted by the Green Turtle, who also provided food and drinks for the participants. The Green Turtle is a local sports bar and grill located at 391 S. Dupont Hywy in Dover. Since the launch of their fundraising program, they have donated over $1,000.000.00 to over 500 community organizations. Their program is a unique one. They not only organize participation but also hand out flyers, which encourages guests, and people in the community to dine at their establishment on the day of the event.

Cops N Robbers 5K was sponsored by Trisports Charitable Events. Trisports have helped raise thousands of dollars in communities, as they believe by combining physical and mental fitness while promoting a worthy cause builds better people and stronger communities. They strive to build awareness in communities by promoting your cause and raising funds for your organization.

Custom Awards were given out for overall male, female and master’s winners and top 3 male & female runners in 10 year age groups starting with 14 & under, thru 70 & over. 5K walk awards were handed out for the top 5 male & female finishers. Kiddie K participants were awarded with ribbons.

It was an exciting event with a good cause and was fun for everyone. Some finishers were seen dancing into the finish line, some ran into the finish line with smiles raising their hands in excitement, while others trampled in exhaustion. It was a great atmosphere and brought citizens and police together as they worked to accomplish one common goal.

The race was organized to help support the Dover Athletic league and the fraternal Order of Police, Lodge #15 in Dover, Delaware. 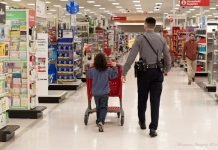 Flags for Our Heroes On Display In Wilmington