Drunk driving is an issue year round and according to MADD, one person is injured every minute from alcohol related crashes throughout the U.S. Since most will be socializing and celebrating during the holiday season, chances of being involved in an alcohol related crash is much higher.

If you plan on going out to a bar or club on New Year’s eve, we warn you that the Division of Alcohol and Tobacco agency are conducting under cover operations to monitor intoxicated patrons being served. The goal is to cut down on drunk driving. They will be watching bar tenders and looking to see if they cut-off patrons who have had too much to drink. Bar tenders who do not cut-off intoxicated patrons could face criminal charges.

Here are some tips to stay safe this New Year’s eve:

DON’T DRINK AND DRIVE: This is the most important rule of all for having a safe New Year’s Eve. In Delaware as it is across the country, it is illegal to drive drunk. If you have a BAC (Blood Alcohol Content) level of .08 or more, you are considered impaired and could be arrested for driving while drunk. Worst yet, you could also get into an alcohol related crash.

Please consider the amount of alcohol it takes to get to that number (.08) and it will greatly depend on a variety of factors such as how fast you drink, weight, and gender. If you’ve had anything to drink, don’t get behind the wheel no matter what.

DESIGNATE A SOBER DRIVER: The best thing to do is to plan ahead. Talk to some friends who don’t drink and then chose someone dependable to be the sober designated driver. This means you can relax and indulge without worrying about driving yourself home.

TAKE A TAXI CAB: While you may have to wait for an available cab, it’s better than taking a chance with your life or someone else’s by drinking and driving. Best part is, you don’t have to remember the phone number to a taxi. Just dial #8294 to be connected to your local Taxi service and it doesn’t matter where you are in the U.S.

HAVE A SLEEPOVER: Consider making plans to sleep where you’re celebrating New Year’s Eve or make early hotel arrangements. This will keep you safely off the roads and allow you to drink as much as you want without worrying about driving impaired.

DON’T DRIVE AT ALL: Best option is to not drive at all New Year’s Eve. If at all possible, avoid getting behind the wheel of a car even if you haven’t been drinking. Even if you are sober, there’s no way to control other drivers. There will probably be lots of impaired drivers on Delaware roadways and the best way to stay safe is to avoid driving all together. If you do have to drive, be sure to wear your seat belt and stay alert for people driving under the influence.

Have a pet? Consider this: 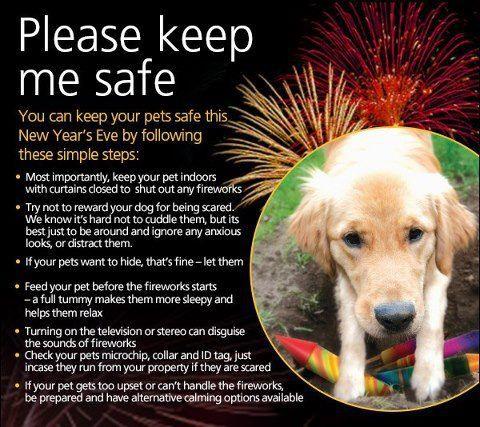