He was was one of two remaining hostages held over night at the James T. Vaughn Correctional Center located in Smyrna.

Smyrna: He was was one of two remaining hostages held over night at the James T. Vaughn Correctional Center located in Smyrna. Authorities said, the guards who were taken hostage earlier in the ordeal were badly beaten by their captors and suffered broken bones, cuts and an eye injury. They also said their injuries were not life-threatening.

After 8:00 P.M. Wednesday night, the two that remained held against their will at the facility was Sgt. Steven Floyd, and a female counselor, who was safely rescued minutes after the tactical teams forced their way into the facility using heavy equipment to bust down a wall. According to authorities, once inside, they found Floyd unresponsive, He was pronounced dead about a half-hour later. 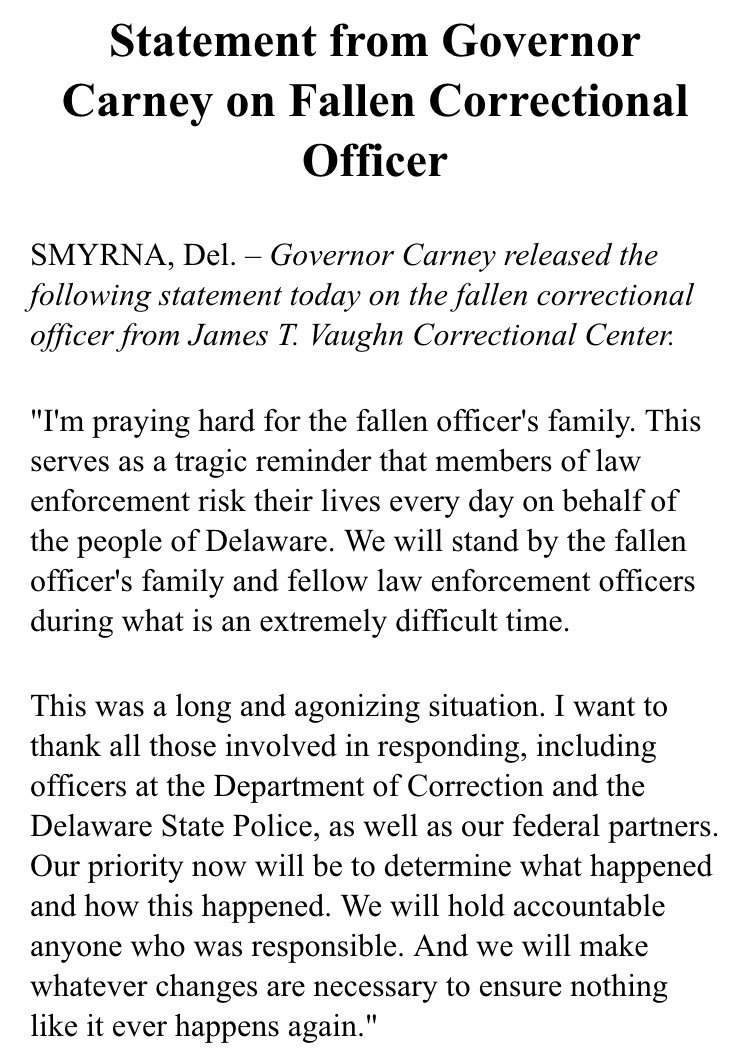 “She was not injured in this ordeal, and I would go as far to say that there were inmates that actually shielded this victim,” Delaware Secretary of Safety and Homeland Security Robert Coupe of the female counselor that was rescued.

In a late morning press conference, Gov. John Carney said of the uprising, “a torturous ordeal.”, “authorities will hold accountable those responsible and make whatever changes are necessary to ensure nothing like it ever happens again.”

“My prayers all day yesterday was that this event would end with a different result but it didn’t,” the governor said. “So today all of us mourn for the family of Sgt. Floyd.”

It was just before 10:30 A.M. Wednesday morning when officials received a call for a reported fire at the James T. Vaughn Correctional Facility located at 1181 Paddock Rd, Smyrna. When fire officials arrived, there was no fire. Shortly after, an officer radioed in for immediate assistance and the prison was put on lock down after staff members were taken hostage. It was then that the emergency SWAT team was activated.

During the lock down, The News Journal received a phone call on their tip line from a woman who claimed to be the fiance of an inmate and stated that he was being held hostage at the facility. Reporters began recording the call and a man was then patched through the line and began making demands. The News journal have released those recordings to officials which helped them understand the situation better.

“I’m just doing what I’m being told to. I’m just trying to help, ma’am,” the man told a News Journal reporter. “They just need somebody to hear their demands.” The man would not give his name because he said he was instructed not to.

Aerial video from this morning of inmates outside Vaughn Correctional Center near Smyrna #NetDE https://t.co/MkQ7EDi4NH

Most of the demands appeared to called for prison reform

It used to also house inmates sentenced to the death penalty and held executions there until late last year when the death penalty was ruled unconstitutional. The incident unfolded in building C Tier B which houses 125 inmates.

The last incident to happen at the facility was on July 12, 2004, inmate Scott A. Miller abducted and raped a prison counselor. Miller, a convicted serial rapist, was serving a 699-year prison sentence at the Delaware Correctional Center – now Vaughn Correctional Center – when he passed through two security checkpoints armed with a homemade knife before taking Cassandra Arnold hostage for nearly seven hours, sexually assaulting her during the ordeal. The standoff ended when a corrections officer shot Miller to death.