NEW CASTLE: Police say that on Tuesday, a male suspect entered the Rite Aid located at 2034 New Castle Avenue, approached the sales counter and asked the female clerk for several cartons of cigarettes. After the clerk retrieved the cigarettes, the suspect implied that he was armed with an unknown make and model gun, and ordered her to turn them over to him.

According to police spokesman, Jeffrey R. Hale, the clerk complied with the suspect’s demands and the suspect exited the store and fled in an unknown direction. The clerk was not injured.

Police say that the suspect was described as a black male. He was 40-45 years of age, 5’09”-5’10” tall, weighed 160-170 lbs., and was last seen wearing a black hat, black pants, and black shoes. There is no further physical or clothing description available.

If anyone has any information in reference to this incident they are asked to contact the Robbery Unit at Troop 2, Glasgow, at 302-365-8566. Information may also be provided by calling Delaware Crime Stoppers at 1-800-TIP-3333, via the internet at www.tipsubmit.com, or by sending an anonymous tip by text to 274637 (CRIMES) using the keyword “DSP.” 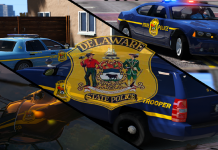 Owner of Down & Dirty Cleaning Services indicted by grand jury...