An eight year State Trooper is dead and his killer was holed up in a Middletown home for over 21 hours and later killed in a gun fight with police. Now investigators are trying to piece together “WHY?”

BEAR: It’s a sad day and a sad story as we bring the Top story of the day to you. Earlier today we reported that police were responding to a report of an officer shot at the Wawa in Bear. Later today, police in a press conference confirmed that a Delaware State Trooper was in fact shot and killed during a traffic stop of a suspicious vehicle at that Wawa.

Police say, on Wednesday, April 26, 2017 at approximately 12:06 PM, an 8 and a half-year veteran of the Delaware State Police, Cpl. Stephen Ballard, conducted a traffic stop on a suspicious vehicle in the parking lot of the Wawa located at 1605 Pulaski Hwy in bear. Cpl. Stephen Ballard, while in full uniform and a fully marked police vehicle, approached the male driver of a red Dodge Charger. There was also another male subject in the front passenger seat. 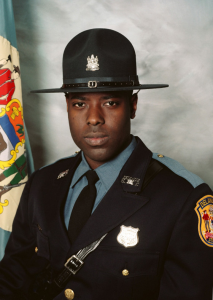 Cpl. Ballard made contact with the driver and the passenger, both of which provided identification. Cpl. Ballard then moved to the passenger side of the vehicle to speak with the occupant, who was later identified as Burgon Sealy Jr, 26, of Middletown, DE, who advised that he had arrived in a gray Honda Accord which was also parked at the Wawa.

According to Jefferey R. Hale, a police spokesman, Cpl. Ballard then asked Sealy to step out of the Dodge Charger. A struggle Ensued when Sealy exited the vehicle, at which time the Sealy opened fire on Cpl. Ballard with a handgun he had produced from his waistband. As Cpl. Ballard attempted to run for cover behind another parked vehicle, Sealy pursued him and fired the handgun which struck Cpl. Ballard in the upper body. Cpl. Ballard immediately went to the ground and Sealy continued to fire multiple rounds at close range striking him again in the upper body, after which, Sealy ran to the gray Honda Accord and fled from the parking lot. The driver of the Dodge Charger remained in the Wawa parking lot and was taken into custody by responding troopers and after investigation, was determined to not be a suspect in this incident.

As the Delaware State Police Special Operations Response Team (S.O.R.T.) arrived at the residence and began to establish a perimeter, Sealy opened fire on the officers from inside the residence. S.O.R.T. and Conflict Management Teams from allied police agencies attempted to make contact with Sealy in an attempt to persuade him to surrender. It had been learned that he was the sole occupant of the residence.

At approximately 8:22 PM, when the suspect ceased contact with negotiators, the Delaware State Police Explosives Ordinance Disposal Unit (EOD) utilized an explosive breeching charge on the front door of the residence. The Delaware State Police continued to make contact with Sealy in an attempt to work towards a peaceful surrender throughout the overnight hours without success.

At 9:17 AM, Sealy, still armed, exited the residence and engaged the police again. He was then shot by law enforcement. The Delaware State Police and EMS personnel initiated lifesaving efforts; however, Sealy succumbed to his injuries and at 9:29 AM, was pronounced dead. His body was turned over to the Division of Forensic Science to perform an autopsy.

At this time, most of the residents of the neighborhood who had previously been evacuated from the area were allowed to return to their homes.

This investigation into this incident by the Delaware State Police is still on-going. More information will be released as the investigation progresses.