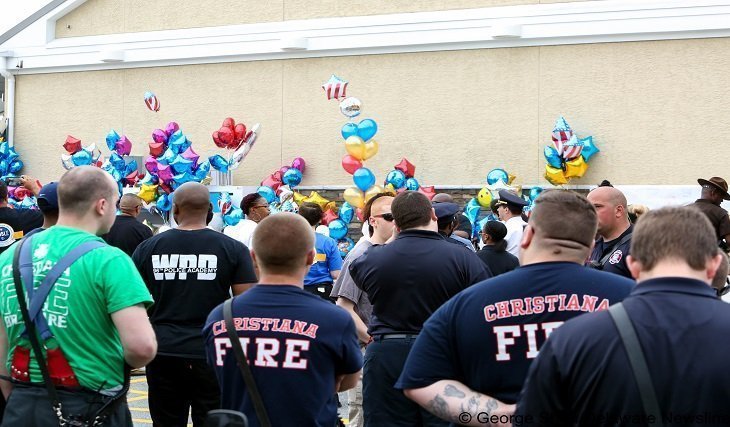 Delaware communities show their respect and brought fowers, cards, and balloons to a memorial set up at the Wawa where the memorial continues to grow for slain state Trooper, CPL. Stephen Ballard.

BEAR: People from all around Delaware have been stopping at this Wawa, located at 1605 Pulaski Hywy in Bear, Delaware, to lay down flowers, cards, balloons, and sign condolences. This is the Wawa at which a Delaware state Trooper was shot and killed while conducting a traffic stop on a suspicious vehicle in the parking lot.

On Wednesday, April 26th, shortly after 12 noon, CPL. Stephen J. Ballard, a Delaware State Police Trooper who was assigned to Troop 2, was pulling into the parking lot at the Wawa in his fully marked police cruiser. As he pulled in, he noticed a suspicious vehicle sitting in the parking lot where he stopped his cruiser. Police say that the vehicle, a red charger, was occupied by two males. CPL. Ballard then proceeded to get out of his cruiser, approached the driver’s side of the vehicle, and spoke with the driver, but for unknown reasons, turned his attention to the passenger.

According to police spokesman Jefferey R. Hale, Ballard walked towards the passenger side to address that passenger. The two exchanged some words and Ballard then asked the passenger, later identified as Burgon Sealy, 26, of Middletown, to step out of the vehicle. Police said that at that point, Sealy exited the vehicle, pulled a hand gun from his waist, and began firing at CPL. Ballard, who then ran for cover around another vehicle. Unfortunately, Sealy pursued him, firing several more times. That’s when Ballard, an 8+ year Delaware State Trooper, fell to the ground. Sealy then approached Ballard as he laid face down on the ground and took several more shots at point blank range. Sealy then fled the scene in a grey Honda.

When responding officers arrived, they found Ballard face down on the ground in the Wawa parking lot and surrounded by people trying to help him. He was immediately rushed him to Christiana Hospital, where he later succumbed to his injuries.

Wawa officials, on the day of the killing, stated to media sources that they are “deeply saddened” after the shooting in the parking lot of their store, in Bear, on Wednesday. Officials said the store will remain closed until Saturday “…out of respect to the officer, our associates and all those affected.” and quietly reopened at 8:00 AM.

“The Delaware State Police Family are truly thankful for the outpouring of love, support and prayers from the community. We are eternally grateful to the Wawa family for their heartfelt and thoughtful acts of kindness. We have taken great comfort in the outpouring of support from all who came to this memorial for Corporal Stephen J. Ballard.”, said State police Col. Nathaniel McQueen Jr.

At 10 AM on Saturday, Wawa officials held a memorial ceremony. There were many speakers ranging from Wawa officials to community leaders, but mostly from those who knew CPL. Stephen Ballard and whom were affected by the tragic event.

“The growing memorial is a reminder of what law enforcement deal with on a daily basis.”

Services have been slated for later next week. A public visitation will take place on Friday, May 5 from 8:30 AM. until 10:00 AM at the Chase center on the Wilmington Riverfront. The Chase center is located at 815 Justison St, Wilmington, De 19801

Immediately following the public viewing, there will be a pass and review for uniformed emergency services personnel. A memorial service honoring the life of Cpl. Stephen J. Ballard will then begin at approximately 11:00 AM.

A burial, which will be attended by family and Delaware State Police personnel, will be immediately following the memorial service at the Gracelawn Memorial Park, located at 2220 N. Dupont Hywy in New Castle.

Meanwhile condolences continue to come in from around the country:

Our thoughts and prayers are with the family and friends of fallen Delaware State Police Cpl. Stephen Ballard. pic.twitter.com/HgXstqQhVa

Our thoughts & prayers go out to our brothers & sisters of @DEStatePolice, as we all mourn the tragic loss of Cpl. Stephen Ballard. ⚫️?⚫️ pic.twitter.com/BteCCaLOGg 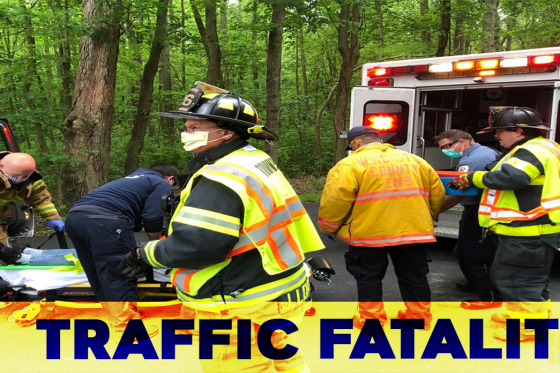