So what’s the big deal? It’s just a football game with high school football players, right? The Blue and Gold football game is more than just a game and it all started on a Saturday afternoon in 1956 when high school students from across Delaware entered a stadium to play football. Players, cheerleaders, and fans gathered for a game that featured more than touchdowns – it raised money to help improve the lives of hundreds of Delaware children with intellectual disabilities.

In 1956, the dream came true and the first Blue-Gold football Game was played on August 25,1956. DFRC’s founders, Bob Carpenter and Jim Williams inspired the game as they wanted to host a fundraising event to spread awareness about intellectual disabilities, while raising funds for programs that serve these children.

Thank you to everyone who came out to the DFRC Blue-Gold All★Star Football Game on Saturday! We appreciate all of your support!

Today more than fifty public, private, parochial, vo-tech and charter schools across the entire state are invited to participate, helping to spread DFRC’s message of diversity and acceptance throughout their schools and communities.

With increased focus on education and awareness, DFRC continues to adapt the needs of the community.

“we want to help all Delawareans understand intellectual disabilities as a natural part of the human experience and amplify our sharing of valuable lessons about diversity and acceptance.”

So here’s the big deal, not every great athlete is the chosen one. imagine being one of 36 top High School football players in your state and being chosen to play against other top high school football players. That’s exactly what happens at the Blue and Gold football game. It’s a time when top athletes come together to play against each other. Just last week, these players received top recognition in the state at the Delaware High School Sports Awards. These are the top high school athletes in the state. 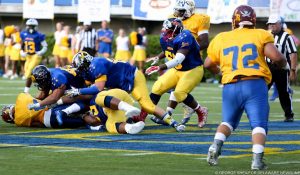 So how are kids chosen? There are several ways that students can participate in the DFRC Blue-Gold All*Star Football experience. High school students are designated by their individual school officials to participate as Ambassadors, Band Members, Cheerleaders, and Football Players. All of these students are integral parts of the Blue-Gold Program and Game each year. Students attending high schools without varsity football teams may still participate as an Ambassador, Band Member, or Cheerleader.

Thirty-six players are selected for each team. The Blue Team consists of players from most high schools in New Castle County. The Gold Team is comprised of players from all high schools in Kent and Sussex counties, as well as the Christina and Appoqunimink District high schools. Each high school with a Delaware Interscholastic Athletic Association sanctioned football team that has qualified seniors will have at least one representative on a Blue-Gold squad each year, however no school may have more than four representatives in a single year.

This year’s game started at 6:00 p.m. and ended with the Gold team with a score of 44-0, dominated over the Blue team and ended with Kenton Yellowdy’s 26-yard TD run.