Winter storm Grayson hit the East Coast bad. Specifically the Delaware and New Jersey shores where as much as 8 inches of snow dropped in some areas.

DOVER (DE): With the strong wind gusts, DELDOT’s ability to keep the snow off the road was no easy task. Governor Carney issued a state of emergency and a level 1 restriction for Sussex county effective at 2:00 P.M. Thursday. The restriction was lifted at 8:00 P.M. Thursday night.

The “bomb cyclone” winter storm rapidly intensified in a low pressure situation, bringing winds similar to a Category 1 hurricane in some regions, along with coastal flooding, power outages, and whiteout conditions.

What is a “Bomb Cyclone” everyone is talking about? The name is not official and refers to “Explosive Cyclogenesis” (also referred to as a weather bomb, meteorological bomb, explosive development, or bombogenesis) refers in a strict sense to a rapidly deepening extratropical cyclonic low-pressure area.

Snow fall totals according to the Delaware Environmental Observing System: 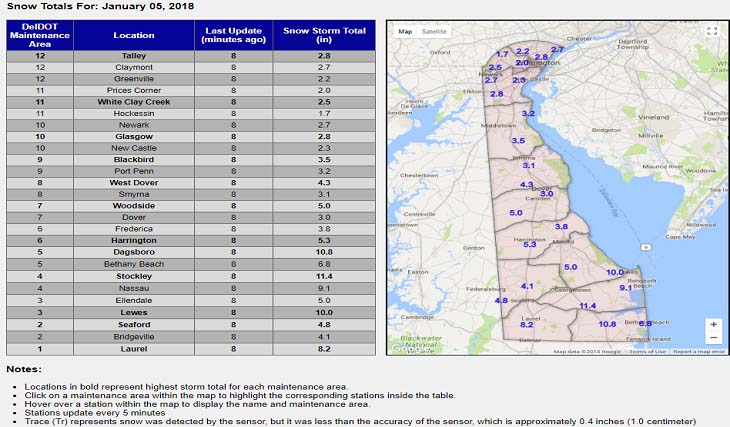 Weather forecasts indicated a winter storm that would impact the region beginning Thursday evening and lasting into the next day. The possibilities of heavy snowfall, including a wintry mix, were the dangers with this storm and the predictions were proven true. This type of weather pattern can create treacherous conditions for motorists who are traveling along Delaware roadways.

I’ve issued a State of Emergency for Sussex County and a Level 2 Driving Restriction countywide. The Delaware National Guard has been authorized to assist state and local officials with any necessary response and recovery for this severe winter storm. #SnowDE pic.twitter.com/pZX4cHGgys

Delaware state police issued a plea for motorists to stay off the roads as treacherous conditions were beginning to build along Delaware roadways. In an earlier press release, police spokesman Richard Bratz stated that “Troopers statewide continue to plan and prepare for the forecasted winter storm, as they will be ready and available to patrol, assist disabled vehicles, and manage roadway incidents and hazards for the duration of the event.”

He also noted that “Most calls for service received by Troopers during winter storms are for vehicle crashes, disabled vehicles, and abandoned vehicles which cause a major problem for DelDOT snow removal equipment and for Troopers responding to emergency situations.”

Troopers urge all motorists who must travel to use extreme caution as road and weather conditions may change rapidly over the course of the event. Motorists should be prepared for snow-covered and slippery roads, along with strong winds and limited visibility which make driving conditions difficult. Use caution while driving when approaching intersections and off ramps, especially bridges and overpasses. Remember to reduce speed and increase following distance between vehicles. Allow ample time to reach your destination, allow extra space between vehicles, and keep vehicle headlights on to increase visibility.

This would be an excellent time to check your vehicle ensuring it is in good working order for the expected conditions. Fill up the fuel tank in advance. Check the windshield wipers, windshield wiper fluid, tire tread, battery life, etc. If you should have vehicle problems, be sure to stay with your vehicle, as freezing temperatures can be life-threatening. Be sure to have an emergency kit in the vehicle consisting of a blanket, bottled water, snack, cell phone charger, and a flashlight.