DNREC charges Hartly man with illegal trapping and other charges

David C. Goley, 54, of Hartly, was charged with one count each of: possession of an unlawful body-gripping trap; setting an illegal leg-hold trap; unlawfully trapping on the Fish & Wildlife owned Tappahanna Wildlife Area near Hartly; operating a motor vehicle off an established roadway on a state wildlife area; operating an unregistered motor vehicle and six counts of setting improperly tagged traps.

Goley was arraigned at Justice of the Peace Court 7 in Dover where he plead guilty, was fined $234, including court costs, and released. Goley also forfeited possession of a body-gripping trap with a jaw spread in excess of 5 inches, which is illegal to set, tend, or possess in Delaware.

With the exclusion of muskrat traps, all traps set must be tagged with the trappers issued license number, and trapping on any Fish & Wildlife-owned property is prohibited without a valid contract. 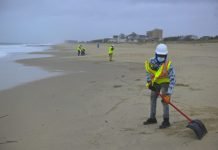