DNREC orders DuPont to pay over $53,000 in fines and fees after waste violations were discovered and it’s Experimental Station.

DNREC says that old and mislabeled hazardous waste containers were discovered during site inspections in May 2017. In addition to the fine, the Experimental Station was also fined $3,350.00 in cost recovery for the agency’s investigation.

Since the inspections, the materials listed in the agency’s recently issued administrative order have been responsibly disposed of.

DuPont Experimental Station is located on Powder Mill Rd in Wilmington and operates as a research and development facility. During operations at the facility, Dupont generates hazardous waste and are permitted to store the waste on site no longer than one year. DuPont also leases laboratory space to several other companies including Chemours. Chemours is also a generator of hazardous waste.

On May 16th representatives from DNREC conducted a compliance assessment at the site. DNREC identified two violations of Delaware’s Regulations Governing Hazardous Waste, including storing waste over the one-year storage limit and failing to properly identify hazardous waste.

Inspectors discovered a hazardous waste container that had been picked up from Chemour’s facility in March 2016 and taken to DuPont’s Experimental Station.

“The waste identified during the May assessment was generated by Chemours, but was received by DuPont and stored on DuPont’s permitted storage pads. As such, the waste was in DuPont’s possession and compliance responsibilities remain with DuPont”., Globetti said.

On July 11th, DNREC representatives conducted a second assessment and identified a third violation of storing hazardous waste in excess of the one-year storage limit., The waste identified in the July assessment was generated by DuPont and was stored on DuPont’s permitted storage pads.

According to the secretary’s order, DuPont was given a notice of the violations and was given thirty days to respond. They were also requested to provide supporting documentation demonstrating compliance, and on July 11th DuPont responded and corrected the violations.

On the same day, DNREC representatives conducted a “routine full compliance inspection”, and found DuPont in violation of its issued permit. DNREC says, storage of hazardous waste in excess of one year of a violation of permit condition.

DuPont has 30 days to appeal the secretary’s order. 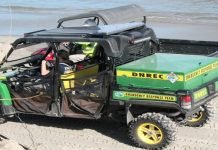 DENREC’s Bin It To Win It aimed to educate students about...