Delaware State Police have recently been made aware of unsolicited phone calls being received by members of the community, from individuals claiming to be with the IRS.

DOVER (DE): On Wednesday, Delaware State Police issued a general scam alert as they have become aware of a recent rash of phone calls to citizens from individuals claiming to be with the IRS.

Scammers would call a citizen claiming to be with the IRS and proceed to claim that the individual owes the IRS money which must be paid promptly. If the victim refuses, they are threatened with arrest, deportation, or suspension of their driver’s license, amongst other things. In the most recent phone calls, the individual requests the victim send money in the form of an iTunes card.

According to police spokesman, Michael Austin, “many of these scams are difficult to investigate. They will target persons of all age groups. Delaware State Police is asking citizens to remember the tips previously mentioned in order to not become a victim of one of these scam artists.” 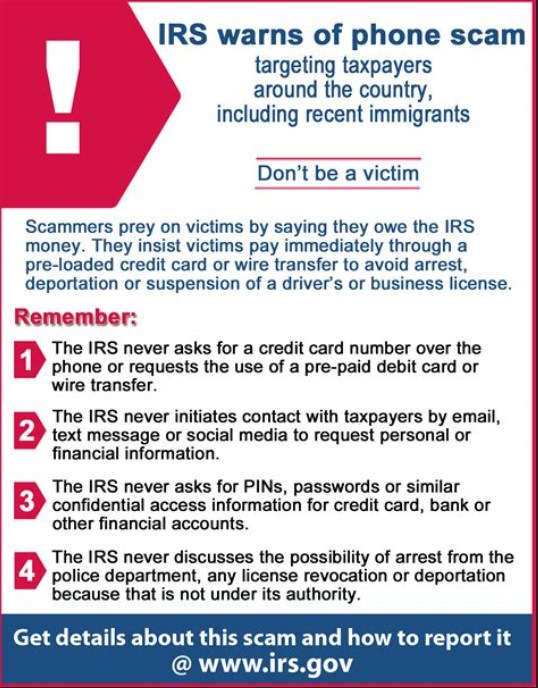 The IRS would never call you to demand an immediate payment, nor would they call about taxes owed without first having mailed you a bill. They also would not Demand that you pay taxes without giving you the opportunity to question or appeal the amount they say you owe.

The IRS would not require you to use a specific payment method for your taxes, such as a prepaid debit card and they definitely would not Ask for credit or debit card numbers over the phone or threaten to bring in local police or other law-enforcement groups to have you arrested for not paying., Austin said