A nasty Nor’easter made landfall in Delaware on Wednesday and if you think winter is over, think again, another Nor’easter is brewing on the horizon for Monday.

NEW CASTLE (DE): While the Nor’easter pounded nearby Pennsylvania and New Jersey, Delaware didn’t see much on Tuesday other than rain that eventually turned over to sleet right after 8:00 p.m. in New Castle County.

The real storm didn’t start until late Wednesday morning, as it snowed lightly off and on in the morning with periods of drizzle. It wasn’t until after 9:00 a.m. when the storm intensified and started dropping snowflakes as big as three inches in some areas.

According to the Delaware Environmental Observing System, Greenville got the most snow with 10.4 inches while White Clay Creek got 7.6 inches. Check out the snow fall totals in your area: 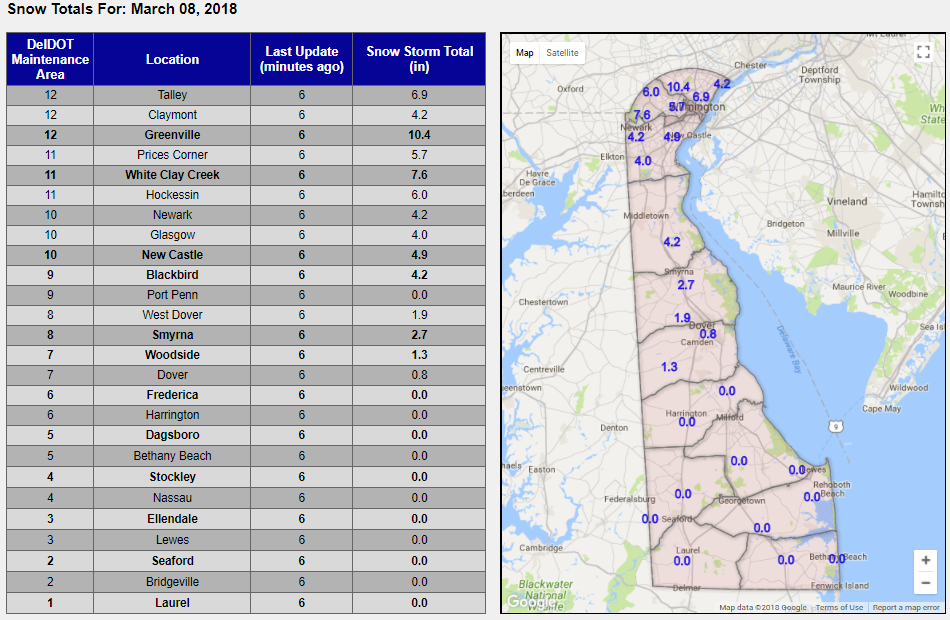 In Kent County, they hardly saw any snow and points south of Dover didn’t even see a drop.

While most of the damage occurred to nearby Pennsylvania and New Jersey, Delaware was having its fair share of headaches. As the storm intensified, traffic slowed down, motorists became disabled, and accidents happened. 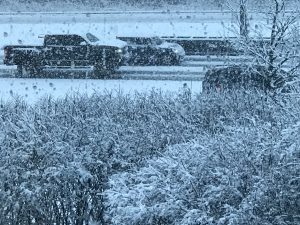 While the Nor’easter pounded nearby Pennsylvania and New Jersey, Delaware didn’t see much on Tuesday other than rain that eventually turned over to sleet right after 8:00 p.m. in New Castle County.

Dover Police reported that “There were a handful of accidents at the worst of it, but now the roads are mostly wet and slick. Rain has melted most of the snow,” Mark Hoffman, a Dover police spokesman said.

At the height of the storm, around 1:00 p.m., the Delaware Memorial Bridge was closed as ten tractor trailers jack-knifed on the Northbound side of the bridge going into New Jersey. The bridge remained closed for two hours as police and crews worked to clear the bridge. The backup could be seen for miles. On Route 13, motorists attempting to get on 295 North was at a stand still and even began to form two lanes trying to get onto the ramp.

Speed on @demembridge reduced to 20 mph. #DRBA police and maintenance units holding all #NJSpan traffic for plowing operations to clear highway and assist a couple tractor trailers who experienced difficulty on bridge. #DESpan okay at this time jes @NJTurnpike @DelawareDOT

Gov. John Carney declared a Level 1 driving restriction at 2 p.m. that lasted until just before 5 p.m. Level 1 means drivers should use extra caution driving and encouraged not to drive at all unless necessary.

We understand that outages are disruptive for our customers and it is challenging to be without electric service at any time. Our crews will work around the clock until every customer is restored.

The University of Delaware’s main campus in Newark also closed at noon.

More than 2,500 flights were canceled in the United States. Newark Liberty International Airport saw over 50 percent of the airport’s flights canceled Wednesday, according to flight tracker FlightAware.