DOVER (DE): Treatment will be expanded statewide into Kent and New Castle counties during the upcoming weeks. In most years, a total of about 10,000 forested acres that produce large numbers of early-season mosquitoes are strategically sprayed, using larvicides applied by helicopter, according to a release.

“The amount of larviciding needed is determined by woodlands locations and how wet they are, and can vary from year to year, depending on location and amount of precipitation from the past autumn, winter, and early spring,” said Delaware Mosquito Control Administrator Dr. William Meredith of DNREC’s Division of Fish & Wildlife. “This year the extent of woodland pool coverage is slightly above the long-term average.” 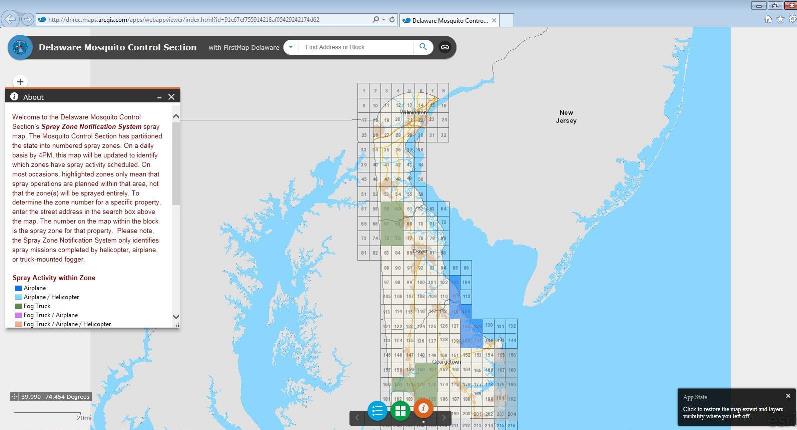 Over the next several weeks, Mosquito Control will apply a bacterially-derived insecticide, Bti. “Like all registered insecticides used by Delaware Mosquito Control, the U.S. Environmental Protection Agency has determined that Bti, when used in accordance with EPA-approved product label instructions as required by federal law, can be applied without posing unreasonable risks to human health, wildlife or the environment,” Dr. Meredith said.

Aerial spraying of woodland pools must be completed before the forest canopy fills in, usually around mid-April, because foliage prevents the insecticide from reaching woodland pools and other wet spots on the forest floor harboring mosquito larvae. “If larval stages of early-season woodland pool mosquitoes are not successfully controlled, an intolerable number of biting adult mosquitoes could take wing in late April and remain through mid-June, becoming particularly troublesome within one to two miles of their woodland pool origins, and significantly affect quality of life and human health for residents and visitors alike,” said Dr. Meredith.

“Delaware has about 100,000 acres of wet woodlands during most springs, and it’s not possible for logistical or budgetary reasons to larvicide all woodland mosquito-producing habitats,” he said. “Targeting wet woodlands near populated areas is the best return-on-investment in providing mosquito relief to the most people.”

The spring campaign marks the beginning of Delaware’s annual mosquito season, which in most years continues until mid-October or early November, depending upon when the first killing freeze occurs. Control activities will be expanded starting in late April to contend with saltmarsh mosquitoes, myriad types of other freshwater mosquitoes, and urban and suburban container-breeding mosquitoes. Following the early spring larviciding campaign, Mosquito Control’s focus will turn to controlling adult mosquito populations and reducing bites from woodland pool mosquitoes that still emerge. Residents are also strongly encouraged to help reduce mosquito-producing habitat by doing some outdoor “spring cleaning,” and preventing or eliminating standing water sources throughout the season.

“Now is not too early for the public to take action to reduce backyard mosquito-producing habitats for species such as the Asian tiger mosquito that are known to carry illnesses such as West Nile virus and chikungunya as well as possibly Zika,” Dr. Meredith said, noting that this includes cleaning clogged rain gutters and downspout extenders, keeping fresh water in birdbaths, draining abandoned swimming pools, and preventing or emptying standing water from containers such as scrap tires, cans, buckets, flower pot saucers, unused water cisterns, children’s toys, upright wheelbarrows, uncovered trash cans, and depressions in tarps covering boats or other objects stored outside.

The public can learn about locations and times of spraying for adult mosquitoes via daily radio announcements, or by calling 800-338-8181 toll-free. Interested parties also may subscribe to receive email, text, or phone message spray announcements for their area by signing up on Mosquito Control’s Spray Zone Notification System at http://de.gov/mosquitospray.