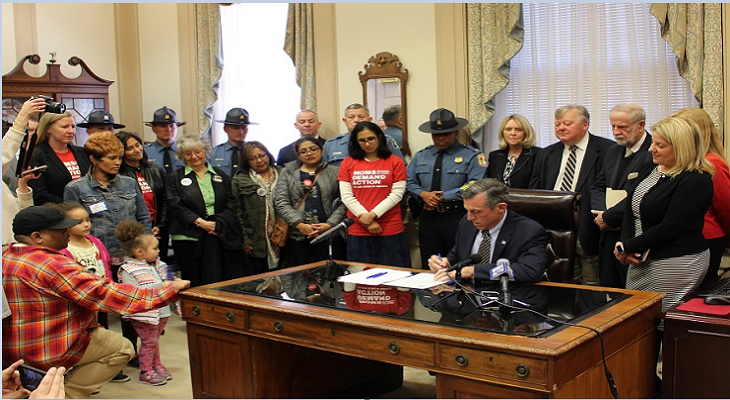 The legislation would prohibit the sale and transfer of specific firearms in Delaware, which are listed in the legislation, as well as copycat weapons that meet certain criteria. It also would prohibit the transportation of assault-style weapons across state lines into Delaware, subject to certain exceptions. The bill would not ban possession of any weapons purchased legally before the legislation’s effective date. It would impose certain restrictions on where lawfully owned assault weapons may be possessed and transported. The legislation would allow possession in a lawful owner’s home, their place of business, a shooting range, and during an exhibition, display, or educational exhibit.

“As we have seen in Parkland, Las Vegas and in many other horrific tragedies across our country, military-style weapons can be used to carry out catastrophic acts of violence. These weapons allow those intent on doing harm to outgun members of law enforcement, and they have no place on the streets of our neighborhoods,” said Governor John Carney.

“It’s true that we need a national approach to confront the threat of gun violence. I believe President Trump and Congressional leaders should take action. But we cannot wait to do what’s right in Delaware. This is important legislation that will make our state safer – and I urge members of the General Assembly in both parties to act quickly and send this bill to my desk as soon as possible. Thank you to Senator Townsend and Representative Longhurst for their partnership, and their leadership, on this issue.”

“The status quo on gun violence isn’t working. Delaware has made important progress in recent years, but we can — and must — do more,” said Senator Bryan Townsend.

“Military-style assault weapons are not protected by the Second Amendment. They have limited or no practical use for hunting or home defense, yet they are the weapon of choice in mass shootings and pose additional risk to law enforcement. It’s irresponsible to make them available to the general public on-demand. We owe it to our students, our families, and our law enforcement to keep weapons of war where they belong: on the battlefield, not on store shelves.”

“We have an obligation to always look for ways to make our communities safer. Having fewer assault-style weapons on our streets is one way we can accomplish that goal,” said House Majority Leader Valerie Longhurst.

“The rallying cry across the country is being repeated over and over – enough is enough, and more than half of gun owners agree that we need to step up and address these firearms. These firearms are massively deadly weapons and should not be sold any longer.”

GOV Carney on gun safety: We stand ready to do our...