With funding from the Delaware Office of Highway Safety (OHS), the Delaware State Police (DSP) are using unconventional vehicles to spot drivers who break our distracted driving laws.

DOVER (DE): Delaware law enforcement agencies are taking highway safety to a whole new level, as they use tactics to the eyes of distracted drivers back on the road. In addition to distracted driving enforcement, police are also looking for traffic safety violations, including seat belt violations.

In the release, Bratz added, “Driving needs your full attention and one quick look at a cell phone or a glance at the radio can divert your attention away from the roadway and lead to a crash. Public Safety on our roads is a top priority, as such we have partnered with the Delaware Office of Highway Safety to enhance enforcement targeting those who are driving distracted,”

“We want Delaware motorists to understand the risks of cell phone and other mobile device usage while driving. Taking your eyes off the road for even a few seconds could result in a crash that could result in serious injury or death. We are serious about enforcement of our traffic laws for everyone’s safety,” said Mitch Topal, OHS Marketing Specialist and Public Information Officer.

According to a National Traffic Safety Administration research, there were 37,461 people killed in crashes on U.S. roadways during 2016, an increase from 35,485 in 2015.


Fatalities increased from 2015 to 2016 in almost all segments of the population—passenger vehicle occupants, occupants of large trucks, pedestrians, pedal-cyclists, motorcyclists, alcohol-impaired driving, male/female, and daytime/nighttime.

According to NHTSA, “Nationally and in Delaware, distracted driving fatalities have been trending upward since 2012. Texting while driving has become an especially problematic trend among millennials. Young drivers 16 to 24 years old have been observed using handheld electronic devices while driving at higher rates than older drivers since 2007.”

The Delaware OHS recognizes that this is becoming a serious problem and is taking steps to reverse this trend in our state. Along with unconventional enforcement strategies, we are employing a concentrated paid media campaign with the theme, “Don’t be the You You Hate.”

According to the U.S. Center for Disease Control and Prevention, motor vehicle crashes are the leading cause of death for teens in the United States. Based on miles driven, teen drivers are three times as likely to be in fatal crashes as drivers age 20 and older. 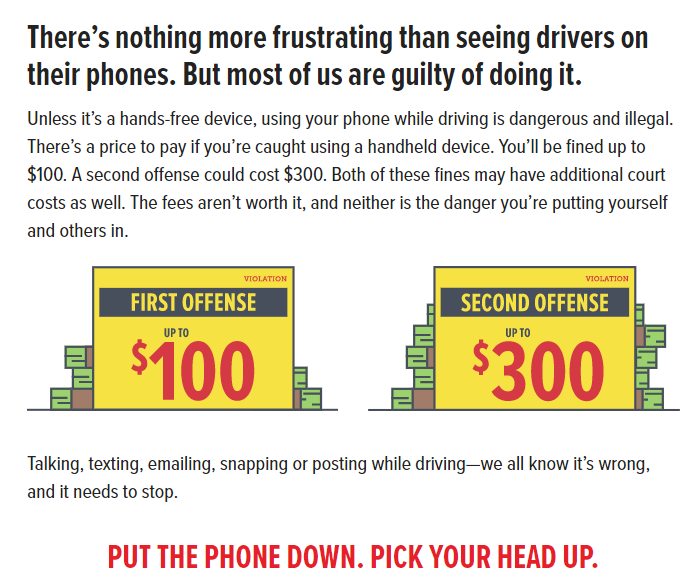