The Delaware Division of Public Health (DPH) is advising Delawareans of a multistate outbreak of E. coli infections linked to chopped romaine lettuce from the Yuma, Arizona, growing region.

WILMINGTON (DE): The Division of Public Health say the lettuce could be contaminated with Shiga toxin-producing Escherichia coli O157:H7 and could make people sick. To date, there have been no confirmed cases reported in Delaware, but DPH urges consumers to take precautions to prevent illness.

The manager was not authorized to speak to the media, but Delaware Newsline was at the Food Lion in Beaver Brook Plaza on Saturday, and found this manager pulling recalled lettuce which should had been pulled a week before. 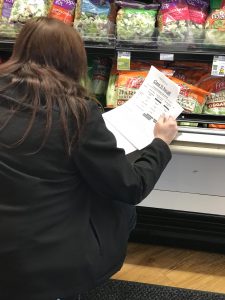 Food Lion is now pulling recalled romaine lettuce that Delaware Department of Health and Social Services (DHSS) issued a warning almost a week ago about.

The Centers For Disease Control and Prevention (CDC), U.S. Food and Drug Administration (FDA), and multiple states are investigating the outbreak. According to the CDC, no common grower, supplier, distributor, or brand has been identified at this time.

• 35 people infected with the outbreak strain of E. coli O157:H7 have been reported from 11 states. According to the CDC, nearby Pennsylvania has reported nine cases, New Jersey has reported seven cases, and Virginia has reported one case.

People usually get sick from Shiga toxin-producing E. coli two to eight days (average of three to four days) after swallowing the bacteria. Most people infected with E. coli O157 develop diarrhea, severe stomach cramps and vomiting. Most people recover within one week. Some illnesses last longer and can be more severe, resulting in a type of kidney failure called hemolytic uremic syndrome (HUS). HUS can occur in people of any age but is most common in young children under 5 years, older adults, and people with weakened immune systems.

Symptoms of HUS can include fever, abdominal pain, pale skin tone, fatigue and irritability, small, unexplained bruises or bleeding from the nose and mouth, and decreased urination. People who experience these symptoms should seek emergency medical care immediately. Medical providers should report suspected cases of E. coli O157:H7 to the DPH Office of Infectious Disease Epidemiology at 302-744-4990 or 24/7 at 888-295-5156.

Gatorade Player of Year chooses SODE as charity of choice