In total, 15 murders committed by MS-13 members have been charged in the fifth superseding indictment and underlying indictments in this case.

Seven of the newly added defendants are scheduled to be arraigned this afternoon before United States District Judge Joseph F. Bianco at the federal courthouse in Central Islip, and the previously charged defendants will be arraigned at their next scheduled court appearances.

“The Department of Justice will not allow MS-13 to terrorize our citizens or control our communities,” said Attorney General Jeff Sessions. “With more than 10,000 members across 40 states, MS-13 is one of the most dangerous groups in America. The day that I was sworn in as Attorney General, President Trump ordered me to focus on dismantling transnational criminal organizations like MS-13, which is based in El Salvador. We have followed that order, working with our allies to arrest or charge thousands of MS-13 members across the Western Hemisphere since then. When I visited Long Island last year, people told me about how the MS-13 threat was inflicting violence and fear on the community. And so I want to thank our Assistant U.S. Attorneys John Durham, Paul Scotti, Michael Keilty, and Raymond Tierney as well as our state and local law enforcement partners in New York for all of their hard work on this case and so many other MS-13 cases. Today’s indictment is our next step toward taking this despicable gang off the streets for good.” 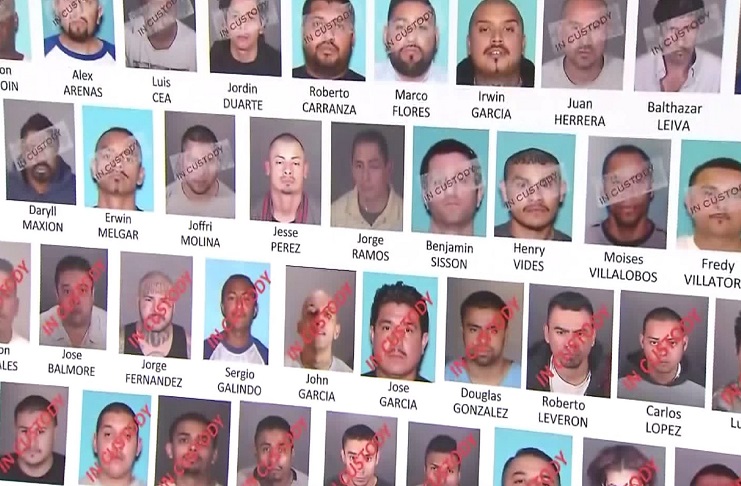 “The charges in this indictment further demonstrate the utter brutality of the MS-13 and the havoc the gang inflicts on our communities,” stated United States Attorney Donoghue. “This Office and our law enforcement partners will continue to combat the MS-13’s violence with relentless perseverance until the gang is dismantled and its members are brought to justice.” Mr. Donoghue expressed his sincere thanks to all the members of the FBI’s Long Island Gang Task Force, as well as the Drug Enforcement Administration for their outstanding work on the investigation.

“The charges and arrests detailed here show our relentless efforts to dismantle and eradicate MS-13 in communities on Long Island,” stated FBI Assistant Director-in-Charge Sweeney. “The unbelievable partnerships and relationships we’ve built with the law enforcement agencies on our Long Island Gang Task Force have allowed us to make a huge dent in the havoc created in recent years by MS-13. Our work isn’t over, and we won’t stop our pursuit until the community no longer fears the violence and deadly attacks by this gang.”

“MS-13 gang activity and the accompanying senseless acts of violence will not be tolerated in Suffolk County, and these developments ensure that these dangerous individuals will no longer be a threat to our communities,” stated SCPD Commissioner Hart. ”The Suffolk County Police Department will continue its partnership with the FBI’s Long Island Gang Task Force as part of its multi-pronged approach and unrelenting pursuit to dismantle MS-13.”

“This Indictment is another clear example of how the members of MS-13 have disrupted the communities that they live in,” stated NCPD Commissioner Ryder. “So many lives have been negatively affected and the loss of life at their hands will never be tolerated. I would like to congratulate all of the investigating agencies and their members for their dedication and professionalism. Every member of MS-13 that is involved in criminality and is eventually incarcerated, is another step to creating a safer environment for our residents and their children.”

As set forth in court filings, including a detention memorandum filed earlier today, a majority of the new charges pertain to a series of crimes committed by members of the Sailors Locos Salvatruchas Westside (“Sailors”) clique during 2016, including the murders of Oscar Acosta, Javier Castillo and Dewann Stacks.

Kevin Torres, the leader of the Sailors clique in New York, and Alexi Saenz, the leader of the Brentwood chapter of the Sailors clique, authorized Acosta’s murder because he was suspected of being a rival 18th Street gang member. On April 29, 2016, Nelson Argueta-Quintanilla and other MS-13 members encountered Acosta, beat him with tree limbs, tied him up, and called co-defendants Alexi Saenz, Jairo Saenz, Jonathan Hernandez and others, who met them. The gang members loaded Acosta into the trunk of a car, drove to a more isolated wooded area in Brentwood, stabbed and slashed Acosta to death with a machete and buried his body, which was not recovered until September 2016.

On October 10, 2016, Alexi Saenz, Jairo Saenz, Wilber Adalberto Fernandez-Vasquez, Frank Alexander Ventura-Ramirez, and other MS-13 members murdered Javier Castillo, who they also suspected of being a rival 18th Street gang member. The defendants lured Castillo, who lived in Central Islip, to Cow Meadow Park in Freeport, where they attacked and killed him with a machete and buried his body in a shallow grave near a saltwater marsh. Castillo’s body was not recovered until October 2017.

On October 13, 2016, only three days after the Castillo murder, Alexi Saenz, Jairo Saenz, Enrique Portillo, Ever Flores and other MS-13 members murdered Dewann Stacks, who they suspected was a rival gang member. While Alexi Saenz and other members of the gang conducted surveillance from one car, Portillo, Flores and another MS-13 gang member attacked and killed Stacks with a baseball bat and machetes before returning to the getaway vehicle driven by Jairo Saenz.

Various members of the Sailors clique are newly charged with four non-fatal violent crimes that occurred during 2016. On July 18, 2016, Alexi Saenz, Jairo Saenz and Portillo attempted to murder two rival gang members in Brentwood. One of those men was shot, and the other man was both shot and repeatedly slashed with a machete, leaving him permanently disfigured. On August 10, 2016, Alexi Saenz, Jairo Saenz, Argueta-Quintanilla, Hernandez and Marlon Serrano attempted to murder rival gang members in Brentwood, where numerous shots were fired, but no one was wounded. On September 12, 2016, Alexi Saenz, Jairo Saenz, Portillo and Serrano set fire to two vehicles at the residence of an individual who had a dispute with the MS-13. On December 18, 2016, Jose Suarez and Flores assaulted two men who were disrespectful toward the MS-13 outside a Super Taco restaurant in Brentwood.

In addition to the three new murders, 12 other murders previously were charged in this case, including, the May 26, 2013 murder of Derrick Mayes, the May 28, 2013 murder of Keenan Russell, the July 14, 2014 murder of Jose Lainez-Murcia, the June 30, 2015 murder of Jonathan Cardona-Hernandez, the June 3, 2016 murder of Jose Pena, the September 13, 2016 murders of Kayla Cuevas and Nisa Mickens, the January 30, 2017 murder of Esteban Alvarado-Bonilla, and the April 11, 2017 murders of Justin Llivicura, Michael Lopez, Jorge Tigre and Jefferson Villalobos, as well as numerous attempted murders and assaults.

The charges in the fifth superseding indictment are merely allegations, and the defendants are presumed innocent unless and until proven guilty.

Today’s superseding indictment is the latest in a series of federal prosecutions by the United States Attorney’s Office for the Eastern District of New York targeting members of the MS-13, a violent international criminal organization. The MS-13’s leadership is based in El Salvador and Honduras, but the gang has thousands of members across the United States, comprised primarily of immigrants from Central America. With numerous branches, or “cliques,” the MS-13 is the largest and most violent street gang on Long Island.

Since 2010, this Office has obtained indictments charging MS-13 members with carrying out more than 45 murders in the Eastern District of New York, and has convicted dozens of MS-13 leaders and members in connection with those murders. These prosecutions are the product of investigations led by the FBI’s Long Island Gang Task Force, comprising agents and officers of the FBI, Bureau of Alcohol, Tobacco, Firearms and Explosives, U.S. Immigration and Customs Enforcement – Homeland Security Investigations, SCPD, NCPD, Nassau County Sheriff’s Department, Suffolk County Probation, Suffolk County Sheriff’s Department, Rockville Centre Police Department and the New York State Police.

The government’s case is being prosecuted by the Office’s Long Island Criminal Division. Assistant United States Attorneys John J. Durham, Paul G. Scotti, Michael T. Keilty and Raymond A. Tierney are in charge of the prosecution.

Gallery: Were you seen at the 2018 Delaware Mud Run?