Twin Capes, a ferry once part of the Cape May-Lewes Ferry fleet, was sunk on Friday to become part of Delaware’s artificial reef system.

LEWES (DE): It was 43 years ago that the Twin Capes was christened on the Delaware Bay, and after thousands of ferry runs between Lewes, Delaware and Cape May, New Jersey, she was finally decommissioned and put to rest at the bottom of the Atlantic Ocean – to become part of Delaware’s acclaimed artificial reef system which includes 327 New York City subway cars and famed military vessels that includes ex-destroyer USS Arthur W. Radford, which went down in 2011 as the longest ship reefed on the East Coast, and the Zuni/Tamaroa, the one-time harbor tug and Battle of Iwo Jima survivor turned US Coast Guard cutter that plied Atlantic waters for almost 50 years.

While Radford, at 568 feet, remains the longest ship ever reefed on the East Coast, the 320-foot long Twin Capes may be the best addition yet to Delaware’s artificial reef system for both fishing and recreational diving opportunities, said Jeff Tinsman, Artificial Reef Coordinator for the Delaware Department of Natural Resources and Environmental Control’s Division of Fish and Wildlife. 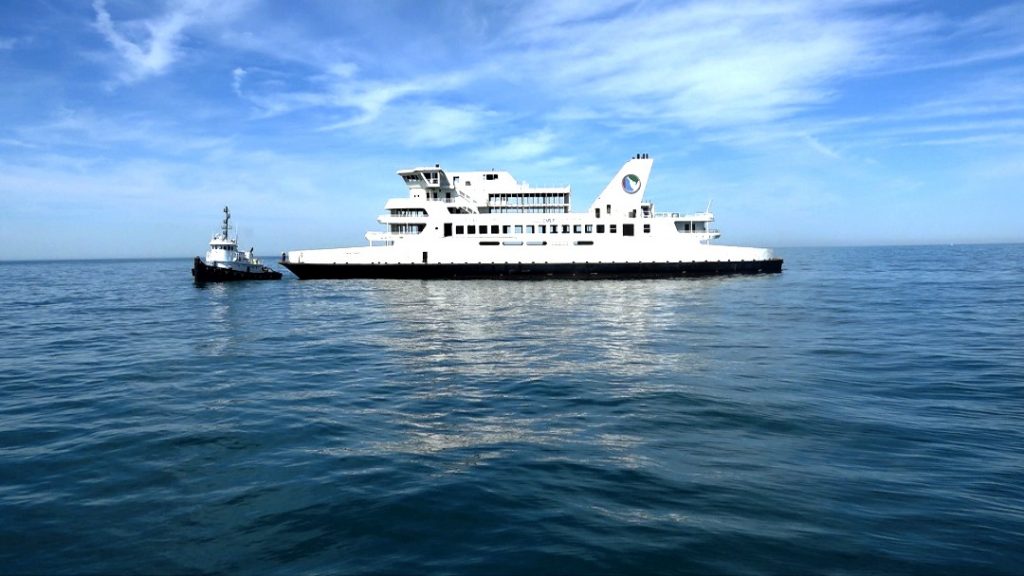 The reefs provide some 400 times more food for marine life than the “featureless and mud bottom” found along much of the Mid-Atlantic Coast. The reef was first permitted in 2006 and is reserved for “high profile, bigger vessels,” Tinsman said.

One of 14 artificial reefs in the Delaware Bay and Atlantic Ocean, the Del-Jersey-Land reef is the deepest at 130 feet and the farthest south of all those off the Delaware shore. The ferry is becoming part of a “unique community,” Tinsman said. Tinsman witnessed the sinking, and made sure the Twin Capes went down at the location it was destined for. The sinking was one of the fastest for a reef vessel he had seen.

“This will really be the crowning jewel,” he said of the Twin Capes. “Just the way it is built. The entire vessel has such a high profile that it is going to provide plenty of food for fish to feed on as well as protecting them from predators and storms. The ferry will provide a unique space for divers. They will be able to swim through the areas once used for vehicle parking areas. The Twin Capes will provide a habitat for a wide variety of marine life, the structure will help to break underwater ocean currents and there will be food for bait fish that draw larger predators.”

Carrying an estimated million passengers during its life on the Delaware Bay, The Twin Capes had made thousands of trips between Cape May, NJ and Lewes, DE. She became the sixth vessel to become part of the reef system, Tinsman said.

According to the Delaware Fish & Wildlife office, “the Twin Capes’ sinking was carried out by Norfolk, Va.-based marine contractor Coleen Marine, which bought the ferry from the Delaware River and Bay Authority (DRBA) last year for reefing.”

The 2,100-ton ferry was one of the original three vessels of the DRBA’s 1970s fleet. During the 1990’s, Twin Capes was retrofitted with a new superstructure and four new decks, multiple lounges, a new pilot house, and “shark-fin” smokestacks. All these features lend to the creation of enhanced fish habitat, while for dive trips, Twin Capes’ 70-foot vertical profile will attract tunas, sharks, and seasonally even barracudas.

The entire Twin Capes project cost about $800,000 officials say. That money came from federal funds collected through taxes on fishing-related equipment and matching private funds. No state money was used. “The reef is being paid for by the people who fish there,” Tinsman said.

The vessel is expected to last at least a century on the ocean floor providing an important habitat for marine life.