For some, the 27-year tradition is just that – a tradition. One that was started some random number of years ago, maybe because someone knew an athlete in Special Olympics and wanted to support the cause.

First plunges have also occurred when a friend dared someone to come along, and then that someone dared another … and so on.

In some cases, the Plunge tradition has developed from family members inviting extended relatives to join in on the fun. With the Plunge now well into its third decade of existence, there has been as many as four generations of a family taking the dip together into the icy waters of the Atlantic.

For the Bonis family of Newark, well, it’s just them. All eight of them. 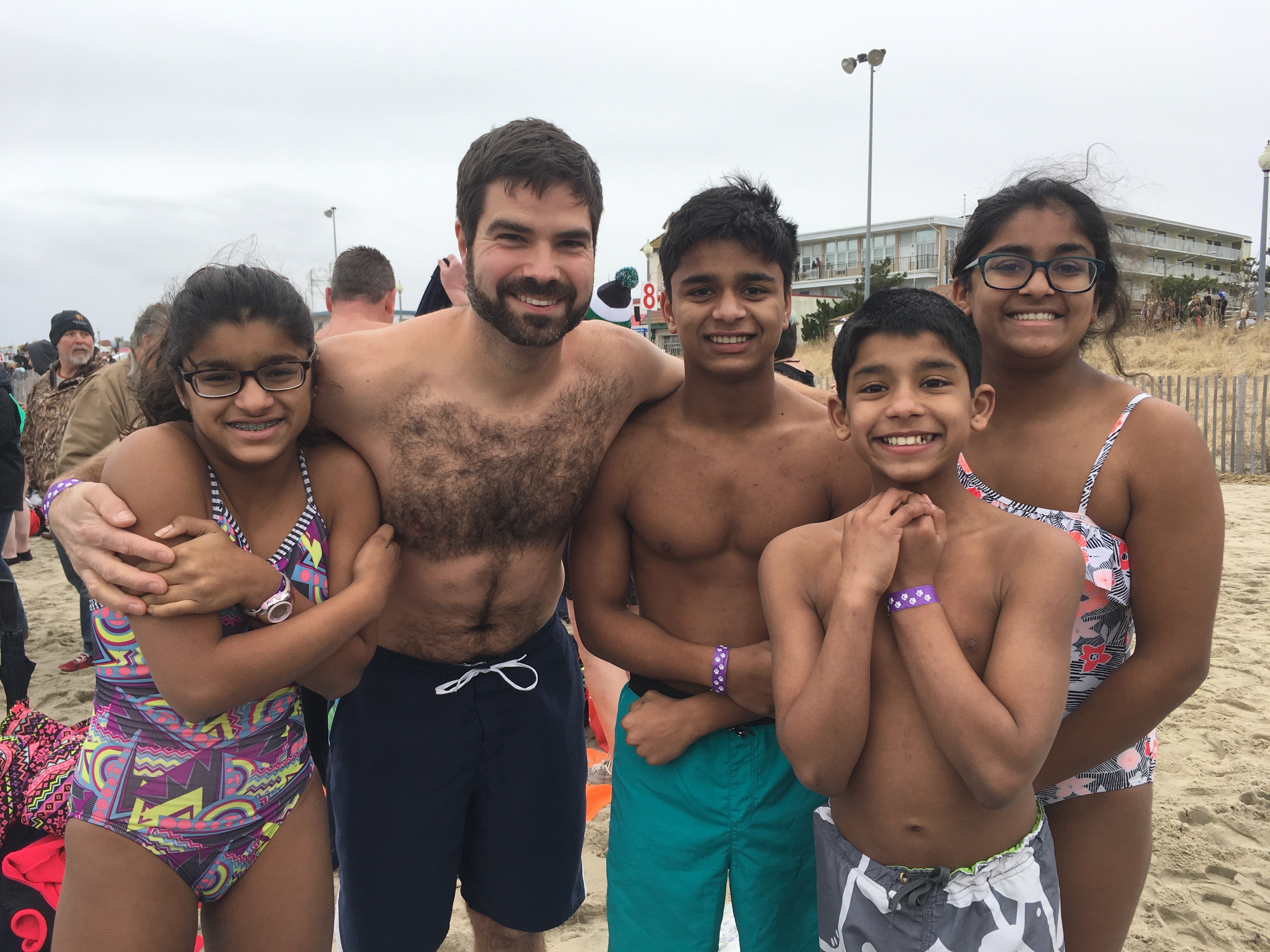 The first plunge for Jeff and Chrissy Bonis happened in 2002, before they were married, when they joined friends who were special education majors with Chrissy at the University of Delaware.

“It seemed like it would be something fun,” Jeff, who has plunged 15 times since, said of that first experience. “I thought it sounded like a good idea to raise awareness and money. You couldn’t go wrong.”

And so the Bonis tradition commenced. It continued every year after until 2011 when both Jeff and Chrissy missed the plunge. They didn’t skip out on it because they didn’t want to plunge. Instead, it was because there had been a major change in their life.

Just before that 2011 plunge, Jeff and Chrissy traveled to India together. Ten days later, they flew home as parents to four beautiful children, siblings by birth, with five years separating the oldest from the youngest.

They returned to the Plunge Weekend Festival in 2012 and, after enjoying the Fire & Ice Festival in particular on Saturday, the five of them watched Jeff resume his plunging tradition. That would become the final year Jeff would plunge “alone.”

“The first year Jeff was just continuing to do it and so we took the kids with us and they didn’t do it, they just watched,” Chrissy recalled.

It was shortly after Jeff dried off that he and Chrissy made the decision that they would be back.

“The plunge date fell at the same time of year as the adoption and so we just felt like it should become a family tradition,” Jeff explained of his family’s commitment to the event. “What better way to celebrate being a family than to be together doing something fun for a good cause.”

“I do it because our family supports the plunge,” Kishan said. “It’s to raise awareness about Special Olympics … and it’s fun.”

Since Kishan’s inaugural plunge at the age of 10, each of his siblings has joined him once they turned 10. At 13, they are required to raise their own money.

“I think we just picked that age to start plunging because Kishan was 10 when he went in for the first time,” Chrissy said. “But I can see that number moving lower for our youngest two.”

The family of six missed the 2014 Plunge because in February of that year, Chrissy gave birth to their youngest daughter, Maya. Their youngest son, Nolan, was born two years later, completing the Bonis family of eight, all whom have returned to the Plunge every year since.

“I enjoy the family time we have together at the Plunge,” the oldest daughter, Jyoti, 14, said. “It’s a nice break from school, we are helping others, and it’s fun to do.”

Babita has experienced helping others hands-on. The 13-year-old is a Unified partner at Newark Charter School, where she has competed in the basketball skills competition the past two years.

“It’s a fun way to help,” she said, smiling. “I like helping my partner and getting to know them. You learn a lot of things about them.”

Ajay, 11, was granted a special exemption from the “you must be 10 years old to plunge” rule since he turned 10 shortly after the 2017 plunge.

“I knew the water was going to be really cold,” he recalled. “I went all the way under, felt how cold it was, and so came running out. It’s why I’m always the first one out.”

The three males in the family take great pride in the fact they go all the way under. Whereas, according to Maya, who watches from a stroller, the girls “only dip their toes in.”

This family tradition – the Bonis’ also participate in the Reindeer Run each year – will continue at this year’s Plunge when the Bonis clan descends on Rehoboth Beach Friday night.

“We’ll cram into a hotel room, just hang out for the weekend and do some family bonding,” Chrissy chuckled. “It’s really the only family trip we do when it’s just the eight of us. No relatives or friends, just our immediate family.

“It’s a special weekend because it’s when we became a family,” she added with a touch of emotion. “I don’t want to speak for everyone, but I think it’s the most fun family weekend of the year.”

No other words were spoken. Everyone sitting around the table just nodded in agreement.