A gunman opened fire on police who was attempting to arrest him on a fugitive warrant, leading to hour’s long standoff with SWAT members.

SALEM (NJ): It all happened in downtown Salem, New Jersey at about 11:30 am. Police say, U.S. Marshals Task Force was trying to take the suspect, identified by family members as 27 year-old Eric Smith, into custody in the 100 block of Broadway when Smith began firing on them from the roof of a building. 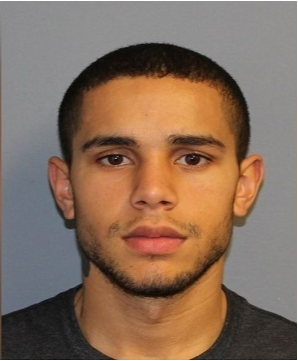 The U.S. Marshals Task Force approached Smith, who was wanted for an outstanding warrant out of Salem City superior court for failure to appear, authorities said.

According Chief John Pelura of Salem City Police Department, Smith was armed with a handgun, went onto the roof of a nearby building and fired multiple rounds at task force members, and one task force member opened fire.

“I just heard a whole lot of boom, boom, boom, and when I walked downtown, I seen all this going on”, said one eye witness.

Armored tanks and SWAT team members with guns drawn surrounded the building as a standoff ensued, and law enforcement established a perimeter in the area that led to schools, businesses, and government offices being placed on lock down, the prosecutors office said.

A large police presence of local, county, state, and federal law enforcement were on the scene as negotiators established communication with Smith, using a bull horn and calling on Smith’s family to help persuade him to surrender.

“I was a few blocks away and just heard a bunch of shots,” one witness, who did not want to be identified.

The building that police surrounded is owned by Salem County Community College. It is unknown if any students were in the building at the time of the gunfire.

People were urged to avoid the area as court offices were closed for the day.

Smith surrendered peacefully without any injuries to himself or police around 3 p.m.

Smith’s aunt, Rebecca Holmes, says she doesn’t know what Smith was originally charged with on the warrant. “I’m just thanking God that he’s OK and he surrendered,” said Holmes.

Police didn’t say what charges Smith may face as a result of today’s incident.