FULL-SCALE TRAINING EXERCISE got underway at New Castle County Airport around 9:00 am. this morning. The exercise serves as the airport’s official emergency drill that satisfies the FAA requirement that all certified airports conduct a full-scale emergency exercise at least every three years.

NEW CASTLE (DE): Chaos, sirens, and overwhelmed communications were all part of this controlled, full-blown emergency preparedness training exercise. The incident? A downed aircraft with multiple victims suffering from various injuries, as well as multiple fatalities at New Castle County Airport. The exercise kicked off around 9:00 AM this morning..

Fire Departments and other emergency personnel were dispatched to the airport from all over the state including Kent and Sussex County fire departmentsand shortly after 9:00 AM, the first units began arriving at the crash site.

The exercise included actors as victims with lifelike injuries including fake blood and broken bones, and they put on an unbelievable performance as emergency personnel rushed to their aid. These actors were so serious about this exercise, some played out pain, agony, fear, and tears to their lifelike injuries. 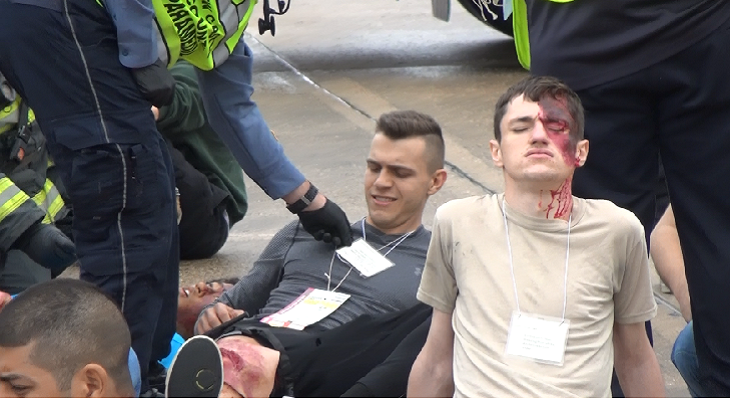 Emergency personnel rushed in to stabilize victims and get them transported to area hospitals, Communications were probably overwhelming between first responders and New Castle County Fireboard as they tried to make sense of what was happening at the scene, and what more manpower was needed.

It’s all a quick reminder how gory and traumatic this would be had it have been a real crash site.

Several incident scenarios were also involved in the exercise that included distraught family members at the gate of the airport trying to reach their loved ones by breaching the gate and rushing the officers who were trying to stop them. Only one made it through the gate and to her loved one, only to be pulled away by a firefighter whom she tried to fight away. Officers from the Delaware River and Bay Authority were tasked with this incident scenario and were evaluated on their performance and their handling of the incident.

Designated as Operation Blue Skywalker, the emergency exercise continued through the early afternoon, and took place near the junction of Penns Way and Dales Way near the former Boeing Hangar on the north side of the airport.

“This emergency exercise provides a valuable opportunity for airport personnel, first responders, and law enforcement professionals to collectively test rescue procedures, communication, and coordination,” Senior Airports Manager Benjamin Clendaniel stated, referring to the FAA required exercise that must take place every three years. “Evaluators will then offer their assessment and feedback on what worked well; identify potential challenges; and what, if any, improvements could be made.”

Aviation professionals and first responders will assess the procedures and interactions of responding personnel. “We value and emphasize emergency preparedness. We also hope the situation never arises when we have to apply what we learn and practice during these exercises,” Clendaniel added.

Lawerence Tan, Chief of Emergency Medical Services for NCC Paramedics said “We participate in full scale exercises to test plans, communications and coordination between multiple agencies and even receiving hospitals during a simulated major incident. These exercises provide an opportunity to expose responders to low frequency, high impact situations without the risks that come from actual injured victims needing immediate care during a true emergency. It sharpens our skills and strengthens our ability to respond to major incidents as a team. Overall, they performed well. There are always opportunities for improvement, and we will be working through the exercise evaluations in conjunction with the preparation of the after action report.”

The last aircraft crash near New Castle County Airport was June 12, 2017, when emergency responders arrived in the 200 block of Quigley Blvd for a helo crash just before 12 Noon. When officials arrived they found an aircraft, later identified as a Eurocopter E135,  engulfed in flames behind the U.S. Post Office on Quigley Blvd, in a grassy area. The pilot was identified as Michael R. Murphy, 37 of Franklinville, New Jersey. Sources say, he was a father to one and his wife was expecting another baby. Murphy was employed by Metro Aviation, who provides medical evacuation services for the University of Pennsylvania. The helicopter was registered and owned by PennSTAR. PennSTAR provides emergency transportation services within a 100 mile radius.

Prior to the Eurocopter E135 crash, the last known aircraft to go down at NCC Airport was in 1947. It was Tuesday November 18, 1947 when the Constellation, named “Star of Madrid”, departed New Castle at 11:06 for a check flight for two crew members. Upon a landing attempt, the Constellation was forced back into the air by the rise of the embankment and landed for the second time on the runway, skidding forward 1,270 feet. The right wing was torn from the fuselage as the aircraft turned over to an inverted position. Fuel spilled from ruptured gasoline tanks ignited, and the wreckage burst into flames. “The Board determined that the probable cause of this accident was the inadvertent landing of the aircraft short of the runway.”