An 18-year-old man is dead, three boys are unaccounted for and a 16-year-old girl is being called the sole survivor after a vehicle crashed into the Chesapeake & Delaware Canal Sunday morning, Delaware State Police said.

At about 9:40 a.m., the vehicle went into the water on the south side of the canal about 1 mile west of the Roth Bridge and was completely submerged, Master Cpl. Michael Austin of the Delaware State Police said Sunday evening.

Police are still investigating why it went off the road. A bystander called 911.

First responders found a 16-year-old girl sitting on the banks of the canal, near the scene of the crash, Austin said. She told police that the 18-year-old driver of the vehicle helped her get safely to shore, then jumped back in to rescue the three boys.

Those boys, who were 6, 12 and 16 years old, are still unaccounted for, Austin said. When asked whether they are presumed dead, Austin would only say that the operation is now being classified as a recovery, not a rescue.

First responders found the 18-year-old’s body in the water nearby. He was pronounced dead at the scene, Austin said.

“He was a hero,” Austin said. “He tried to do everything he could to help the remaining passengers in that vehicle.”

As of 5:00 pm., first responders were still working to get the vehicle out of the canal. Austin said crews would work through the night if needed.

It is unknown if the three missing boys are still in the vehicle or if they were swept away by the water, he said.

All four males were related, Austin said. Three were from Wilmington, while the other was from Newark. The girl, who is from New Castle, was an acquaintance of some kind.

The 18-year-old’s name will be released once his family has been notified of his death.

“My thoughts and prayers go out to a family whose lives were changed forever today,” Austin said.

The canal was temporarily closed to commercial traffic, according to police radio, though private vessels were being allowed through.

One pleasure boater was stopped by first responders as he motored past at high speed and created a wake, apparently unaware of the emergency efforts underway. A yacht, moving much more slowly, was ushered toward the north side of the canal.

There were at least four police and fireboats in the water at about 1:30 p.m., plus a couple of small inflatables. A helicopter hovered overhead for at least part of the response.

A handful of onlookers stopped on the otherwise quiet road on the north side of the canal road to watch the crews work.

The C&D Canal is flanked on both sides by steep embankments and is about 35 feet deep, according to the Army Corps of Engineers. 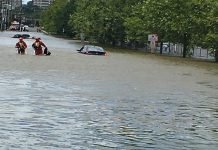