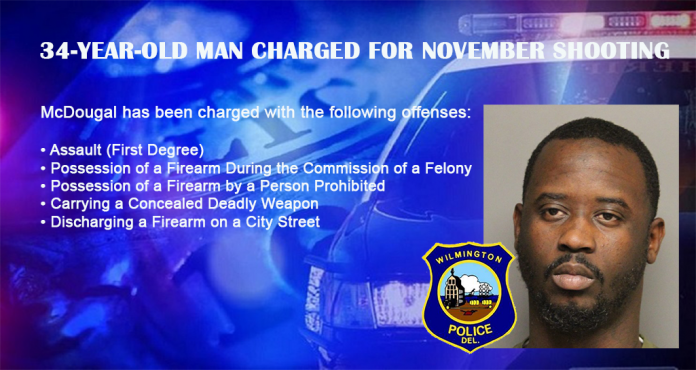 Wilmington Police have arrested a 34-year-old man in connection with a November 18 shooting incident.

WILMINGTON (DE): Wilmington Police say they have arrested a 34-year-old man in connection with a shooting that occured back in November.

According to authorities, On November 18 at approximately 12:11 p.m., police were dispatched to the 100 Block of East 24th Street in reference to a shooting that had taken place.

Arriving officers located a 30-year-old male gunshot victim who arrived at the hospital in stable condition.

A Wilmington Police Department detective who was assigned the case identified 34-year-old Markeevis McDougal as a suspect. Police say Arrest warrants were issued, and McDougal was located on December 16 in the area of 24th and Market Streets. Police took him into custody without incident.

McDougal has been charged with the following offenses:

He was arraigned in Justice of the Peace Court 20 and committed to the Howard R. Young Correctional Institution on $195,000 cash-only bail.