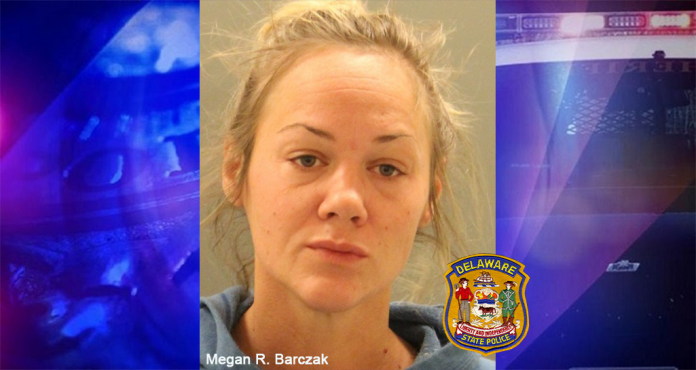 The Delaware State Police have arrested 35-year-old Megan R. Barczak after she burglarized a residence and resisted arrested by Law Enforcement Officers.

LEWES (DE): Megan Barczak was arrested and jailed after assaulting troopers who were calld to a Lewes residence for a burglary incident on New Years Day.

Police say, the incident occurred on January 1, 2020 at approximately 11:29 a.m., when Troopers were dispatched to a residence in the 30000 block of Regatta Bay Boulevard, Lewes.

According to police spokesman Melissa Jaffe, “the owner of the residence reported that her daughter, Megan Barczak had forced entry into her residence and began damaging items.”

Jaffe said that “when troopers made contact with Barczak and while attempting to place her in handcuffs, she proceeded to strike the Trooper.  A brief struggle ensued when a second Trooper assisted and also began to struggle with Barczak.  Barczak was subsequently taken into custody without further incident. “

The Troopers sustained minor injuries and did not require medical attention., Jaffee said.

Barczak was transported back to Troop 7 where she was charged with the following:

Barczak was arraigned before the Justice of the Peace Court and committed to the Delores J. Baylor Women’s Correctional Institution on $24,000 secured bond.

This incident comes just hours after two troopers were assaulted at a New Castle area Wawa during a fighting incident that was taking place.