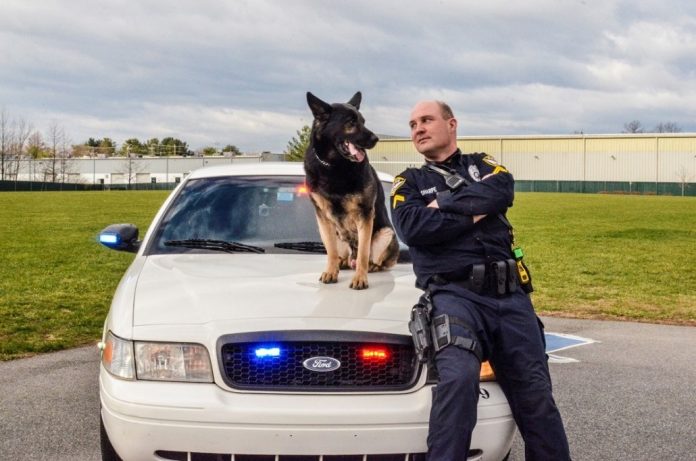 Newark Police announced earlier yesterday that one of their former K9’s, passed away following a battle with acute lumbar disease.

“It is with great sadness that the Newark Police Department reports that retired NPD K9 Kody passed away this week after a battle with acute lumbar disc disease.”. said police spokesman Andrew Rubin.

K9 Kody was born in the Netherlands and was imported into the United States by Ventosa Kennels, in Scotland Neck, North Carolina. K9 Kody was tested and selected from a pool of potential canines at Ventosa Kennels in 2011. His selection among the canine candidates was made easier due to his tremendous performance and social demeanor., said Rubin.

K9 Kody completed canine training with the Delaware State Police Canine Division and entered service as a Newark Police dual-purpose canine team, in late 2011. The team of Cpl. Sharpe and K9 Kody served the citizens of the City of Newark and region until K9 Kody’s retirement in 2018.

During his career, K9 Kody was deployed for hundreds of vehicle and building searches, dozens of human tracks, hundreds of burglar alarms, and numerous fugitive apprehensions. Additionally, as a dual-purpose canine specialized in narcotics detection, K9 Kody was responsible for cash seizures, the seizure of hundreds of items of drug paraphernalia, as well as the seizure of cocaine, marijuana, heroin, PCP, MDMA, and methamphetamine.”

“K9 Kody & Cpl. Sharpe were always excited to participate in the annual Main Street Mile demonstration. K9 Kody was always the professional. During his career, he put his skills on display before thousands of people while conducting many public demonstrations. K9 Kody was very sociable and quickly became a favorite of those in the community – especially the children.

Throughout his time as a member of NPD, and in retirement, K9 Kody brought tremendous happiness to the Sharpe family. The officers and employees of the Newark Police Department remember K9 Kody fondly and wish to extend our sympathies to the Sharpe family during this difficult time. K9 Kody will be fondly remembered and greatly missed.