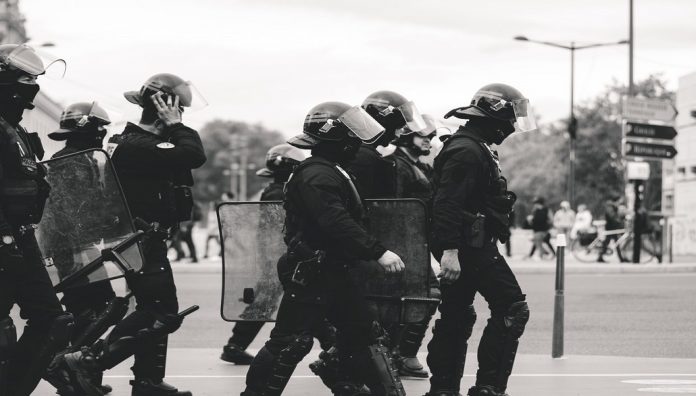 All for a photo op, President Trump ordered police and the military to clear out the streets by force.

As President Donald Trump was making a speech about authorities asserting themselves in the face of the Floyd-inspired protests around the country, a combination of shield-wielding police from federal agencies (Secret Service, Park Police, DC National Guard) and nearby Arlington, Virginia, began to push the assembled crowd back past the north side of the square, toward H Street NW and beyond.

And it was all for a photo op of Trump holding a bible at the historic St. John’s Episcopal Church one block away from the White House.

Bishop Mariann Edgar Budde of the Episcopal Diocese of Washington said Monday she was outraged by the President’s visit to her church, which she said came without advance notice to share “a message antithetical to the teachings of Jesus.”

Trump did not get inside the church because the church has been borded up since rioting began in Washington D.C.

The police action came about 15 minutes before the 7 p.m. curfew that D.C. Mayor Muriel Bowser had announced earlier Monday.

Both Bowser, D.C. police Chief Peter Newsham and the District’s Attorney General Karl Racine have criticized the action as premature and unwarranted, just a quarter of an hour before the curfew was to commence.

Racine’s Tuesday statement called it “an assault” on peaceful protesters. Bowser called it unprovoked and “shameful.”

“The entire country watched as Donald Trump ordered federal law enforcement and military police to assault peaceful protesters and clergy exercising their constitutional rights—unconscionably, for a photo opportunity. He intended to shift the conversation away from police brutality. Instead, he gave it a prime-time screening.”, said Attorney General Karl A. Racine. “In the District, we are now reckoning with an unhinged president responding to nonviolent demonstration with war-like tactics. District residents are frightened by what this show of federal force may portend—whether tear gas, rubber bullets, and low-flying helicopters will give way to more destructive means.”

Newsham noted in his news conference Tuesday that D.C. police was only made aware of Trump’s planned walk to the church moments before it happened, and even then, it was only called “presidential movement in the area” of Lafayette Square.

Almost two days later and yet a lot of questions still remains to be answered by Trump, as disturbing images and videos have surfaced showing the brutality against peaceful protesters including a photojouranlist who was on a sidewalk when he was attacked by a Secret Service Agent. He was stabbed in the stomach with a shield, then as the agent looks up and sees a camera pointed at him, grabs the camera and rips it from the journalist hand.

“I have struggled to find the words for yesterday’s events in Lafayette Square.”, said Delaware Attorney General Kathy Jennings.

“In a long series of daily outrages and capricious decisions, the violence exacted yesterday against lawful, peaceful protestors is among the most shameful., Jenings said.

“That lawful Americans suffered this kind of brutality is bad enough; that it appears to have been planned for a photo op is beyond the pale. The president’s actions affirmed many demonstrators’ fears: that a fragile authoritarian will endanger your life for no apparent reason except to salve his own insecurities. That fear is particularly real in Washington D.C., where a lack of statehood leaves more than 700,000 Americans without the authority to intercede on their own behalf against a president who would readily endanger their lives for a campaign stunt.”

These are the actions of a dictator, not the voice of the American people.

People across the country are using their voices legitimately, justifiably, and peacefully. We are at a crossroads and we can choose to be our best selves—a nation that, confronted with its sins, listens to its neighbors and is moved to work together to atone and heal—or we can reprise the worst moments in history and violently crush dissent. It is painfully clear which path the president has chosen.

Lisa Blunt Rochester weighed in and said, “We’ve become unfortunately accustomed to this President resorting to distraction, but this is different. His actions this evening endanger our democracy and endanger lives. To my Republican colleagues – I prayerfully implore you to step up and speak out. Before it’s too late.”