Rehoboth Beach have removed jersey barricades that was designed to allow for outdoor dinning amid the pandemic, opening up 130 parking spaces.

Rehoboth Beach (DE): As Phase 2 of the state’s economic reopening is underway, the City of Rehoboth Beach have remove a majority of the barricades on Rehoboth Avenue that began Wednesday, June 17.

According to a news release, the commissioners agreed on May 26 to utilize parking spaces on the first two blocks of Rehoboth Avenue as a pedestrian walkway. Jersey barriers were installed on both the north and south sides and the created walkway opened to the public on May 30. The commissioners made this decision to allow outdoor dining and retail while encouraging the public to social distance.

At their June 16 meeting, the commissioners agreed to remove the barricades from the avenue and restore approximately 130 parking spaces. For restaurants that have requested outdoor dining, the barricades will remain in place. Currently, these locations on Rehoboth Avenue include Claws Seafood House, Purple Parrot Restaurant & Bar, Cilantro Cocina de Mexico, Kaisy’s Delight, Nuevo Taco, Blackwall Hitch and Indigo., the release said.

“The commissioners agreed to make these adjustments in response to feedback from staff, the public, and the business community. The barricades are planned through July 31 at this time.”, according to Krys Johnson, spokesperson for the city of Rehoboth. “Commissioners will be discussing the logistics of outdoor dining at future meetings. Restaurants and merchants may continue to submit an application to utilize City sidewalks adjacent to their business only. The Bandstand circle parking meters will be updated to one hour effective Wednesday, June 17.”

The City’s cost for establishing the current walkway, including the barricades and ADA ramps, is $54,526. Reconfiguring the walkway is estimated at an additional $2,000. The City is diligently working on federal reimbursement for these COVID-19 related expenditures. When reviewing the project’s total cost, the commissioners agreed it was necessary to sustain businesses and encourage residents and visitors to summer safely. 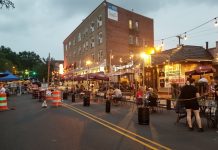 Have you tried “Curbside Dinning” or “Dinning on Delaware” in Wilmington? 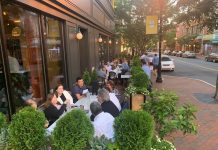 Wilmington’s “Dinning on Delaware” kicks off today along Delaware Avenue

Have you tried “Curbside Dinning” or “Dinning on Delaware” in Wilmington?