SMYRNA, Del. (Sept. 17, 2020) — Delaware’s wildfire crew is returning to the First State after successfully battling blazes on a 14-day assignment in Arizona and California.

Delaware’s 21-person team mobilized at Blackbird State Forest in Smyrna on August 28. On August 30 they were assigned to the Griffin Fire, a 61,821-acre blaze in Arizona’s Tonto National Forest in the U.S. Forest Service’s Southwest Region. 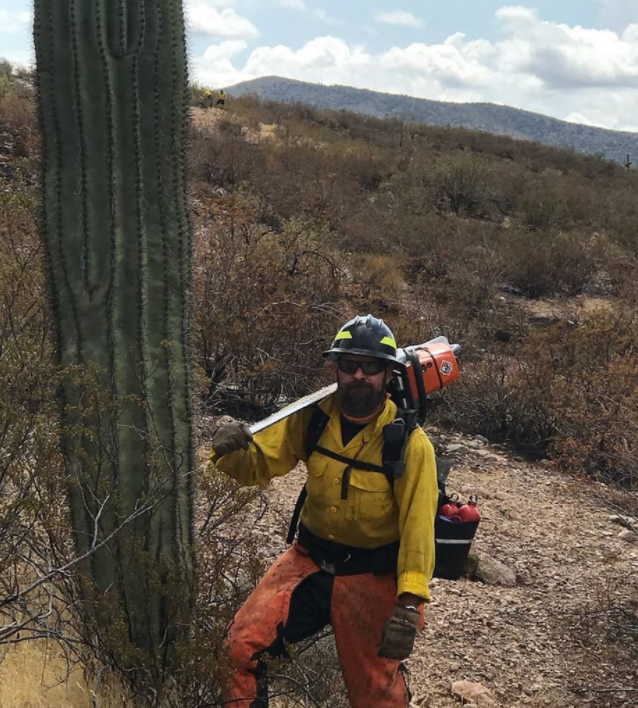 PHOTO: Adam Keever of Newark is a veteran of the Delaware wildfire crew and is shown with his chainsaw next to a giant cactus on the Rockhouse Fire in Arizona.

They subsequently took on the Rockhouse Fire, a 19,506-acre wildfire on land managed by the Bureau of Indian Affairs’ San Carlos Agency, 22 miles southeast of San Carlos, AZ.

On September 9, they were transferred to the Southern California Geographic Area and assigned to the Valley Fire, which consumed 17,665 acres in the Cleveland National Forest and located 19 miles northeast of Chula Vista, CA.  Less than 40 percent contained when Delaware’s crew arrived, the Valley Fire is now over 90 percent contained and many evacuation orders and restrictions have been lifted.

As a Type 2 Initial Attack crew (T2-IA), Delaware’s crew worked on Division Alpha, going direct on the fire line and cold trailing along its edge. The steep and rugged terrain was challenging and required the crew to be transported by helicopter to their division, as shown in the video below (click here for file download link).

More than 32,000 Delawareans May Be Eligible for Stimulus Payments