Police say the investigation began back in 2018 when they began receiving information about an illicit drug dealing network involving the Renteria Criminal Organization.

NEWARK (DE): 28 People have either been arrested or indicted in what is being called the largest drug seizure in Delaware history.

Police say they carried out a multi-agency operation that ultimately ended with the arrest or indictment of 28 individuals on 252 felony charges.

Multiple search warrants were executed which led to the mass seizure of drugs, guns, and suspected drug proceeds. 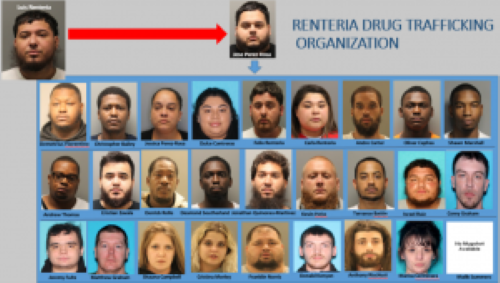 Police say the investigation began back in 2018 when they began receiving information about an illicit drug dealing network involving the Renteria Criminal Organization.

The complicit structure of the organization used multiple subjects all with a specific role to distribute multi-kilogram quantities of methamphetamine, fentanyl, cocaine, heroin, and marijuana., Additionally, investigators have linked the criminal organization to violent crimes in the area, particularly a homicide in the city of Wilmington.

“This investigation exemplifies the shared public safety mission of Delaware law enforcement agencies in concert with our federal partners. While we can see the scope of illegal drugs and weapons seized, it is hard to measure the full gravity this criminal organization could have had in our communities. The team of committed investigators has made our state and region safer today.” 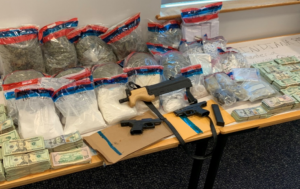 Special Agent in Charge of the FBI Baltimore Field House, Jennifer Boone said, “Dismantling the Renteria organization and getting these illegal and lethal drugs off the street could be the difference in life and death for so many Delawareans. However, our fight against illegal drugs is far from over. The FBI is dedicated to disrupting and dismantling the most significant gangs through intelligence-driven investigations, new and longstanding initiatives, and local and transnational partnerships. Here in Delaware our Safe Streets Task Force has already assisted in the arrest of more than 60 violent and dangerous individuals this year. We have taken more than 30 illegal weapons off the streets. We continue to work with our law enforcement partners but we need the community’s help as well to send us tips and report crimes .”