WILMINGTON (DE): It’s history in the making in Delaware after a proud Delaware Democrat is elected as the 46th president of The United States of America.

After just making a speech at the Wilmington Riverfront Friday night, ABC News has projected joe Biden will become the 46th President of the United States Saturday morning. Many other outlets later in the day projected the same including CNN and NBC.

Biden, a Delaware native and proud Democrat was expected to make his victory speech Friday night around 8:00 p.m. at the Chase Center along the Wilmington Riverfront, but no news outlets would call it delaying Biden’s appearance by two hours. When Biden did speak to the American people, he did not declare victory but instead urged Americans patience and to let the process proceed.

Throughout his campaign, Biden has argued that the “Soul Of The Nation” is at stake, and has promised that he would seek to heal a country fractured by Trump’s presidency. 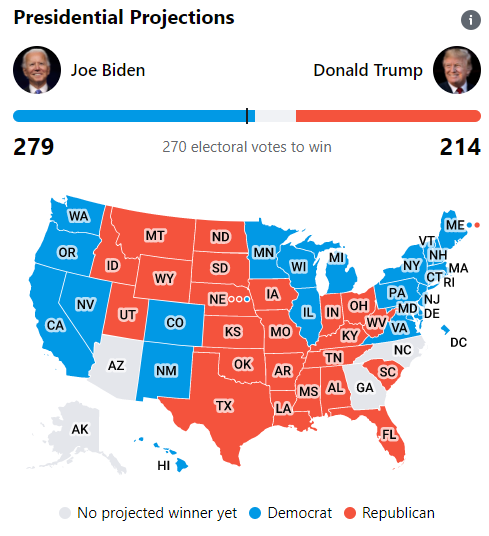 After the announcement Delaware Newsline was joined by hundreds if not thousands of people who began converging onto the Wilmington Riverfront to celebrate and await Biden’s victory speech – which wasn’t scheduled until 8:00 p.m.

Delaware Newsline Caught Up To Some Locals In Our Area Who Weighed In On This Historical Delaware Presidential Victory:

“Thank you Joe Biden for being persistent. Thank you Kamala Harris. This is a presidency that we could look forward to. Finally we don’t have to change the channel when the president comes on tv.,” Said one Biden supporter. “We love you Joe Biden and Kamala Harris, we’re behind you every step of the way.” 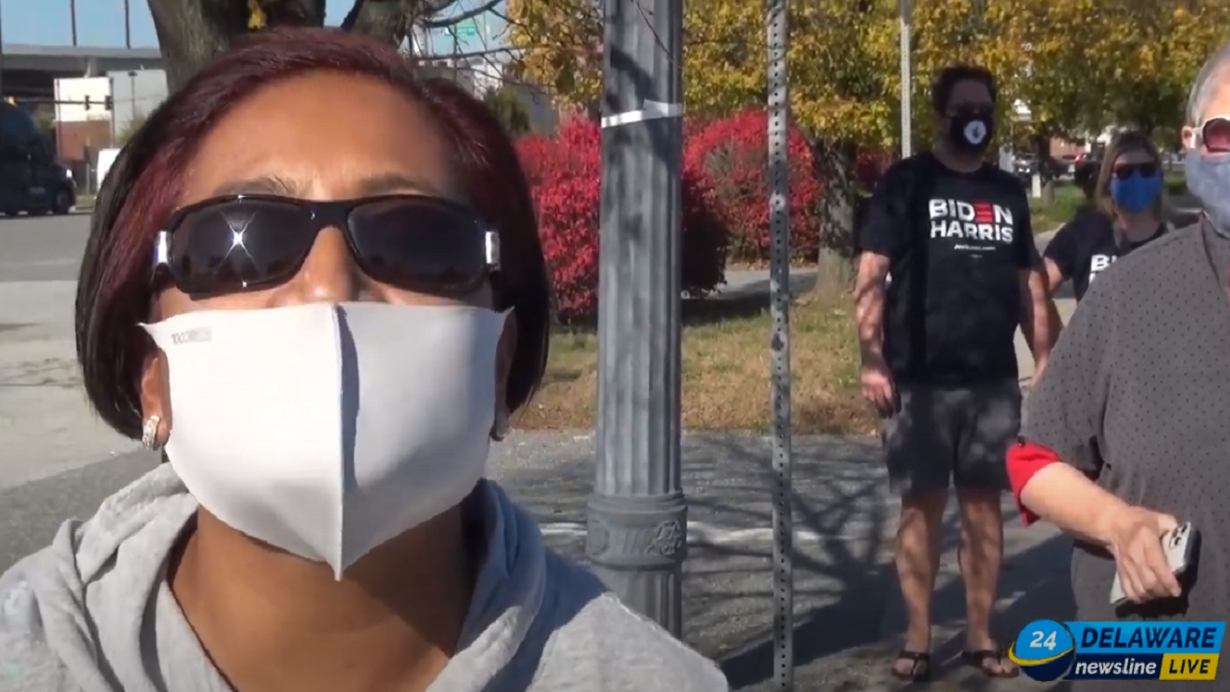 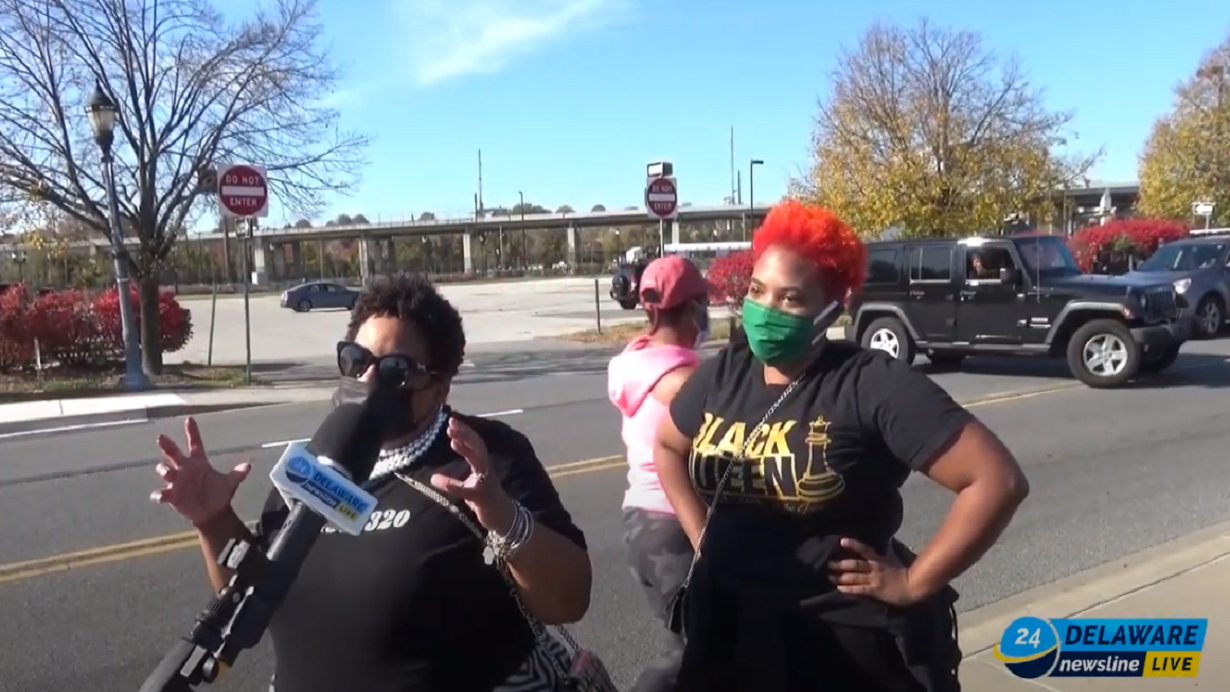 A Constant Flow Of Excitement Throughout The Wilmington Riverfront Was Witnessed In Record Numbers.

Down at the Wilmington Riverfront area, cars were passing with horns honking and people chanting while hanging out their windows and everywhere you looked there were crowds of Biden supporters walking and chanting as motorists passed by struggling to find parking and get through the Riverfront intersections.

Biden supporters which seemed to come in all forms included teens, college students, and families who were seen dressed in American flag attire, or wearing Biden tee shirts and hats.

A lot of supporters were waving flags that included the Biden and Harris flag as well as the American flag. And those who didn’t have these historical memorabilia were trying to find out where they could get them.

Screaming and cheering the Biden victory, we caught up to a couple from Newark who attends the University of Delaware, here’s what they had to say: 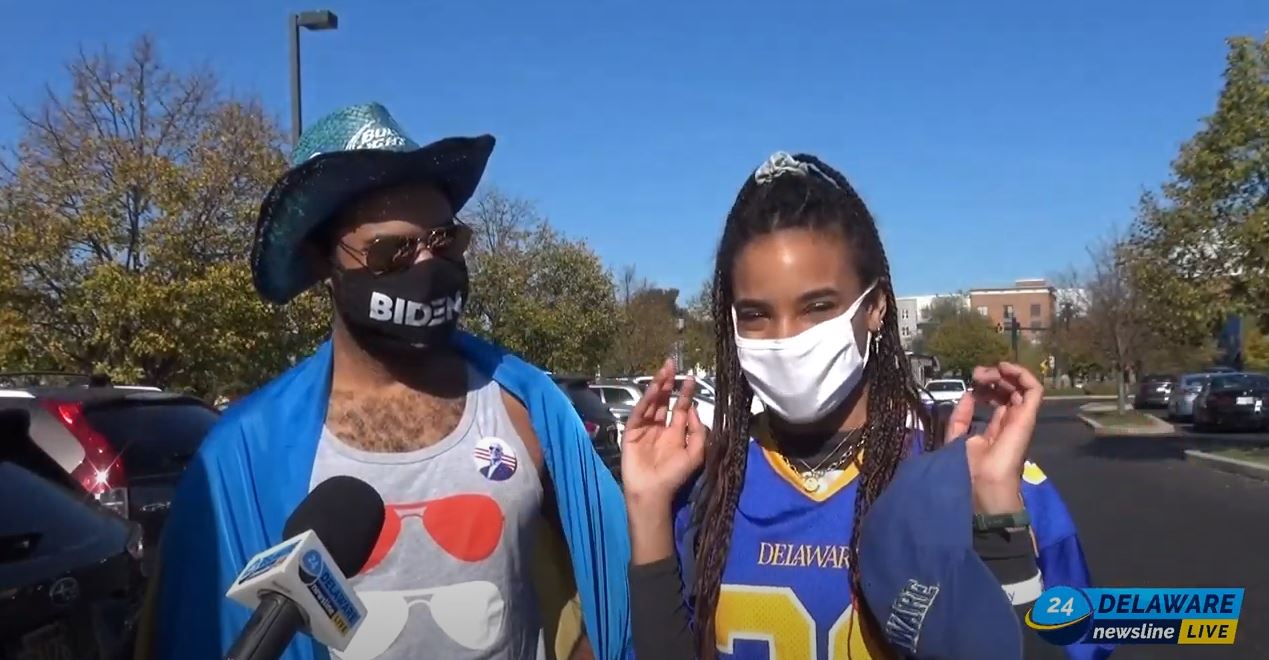 “And I was lucky enough to vote for Obama in my first election and it was just so disheartening to see the country so divided after 8 optimistic years so it’s good to see we’re back on track.,” Said, Remi Poindexter.

Sophie  added, “And like the last 4 years especially, people like minorities, people of color we were living in fear and now it just feels a lot better to be able to like show our support and be out here.”

Even the most vulnerable was seen at the victory celebration.

“I’m an old granny and I am so happy for our children,” said another Biden supporter, “Thank you Joe Biden” 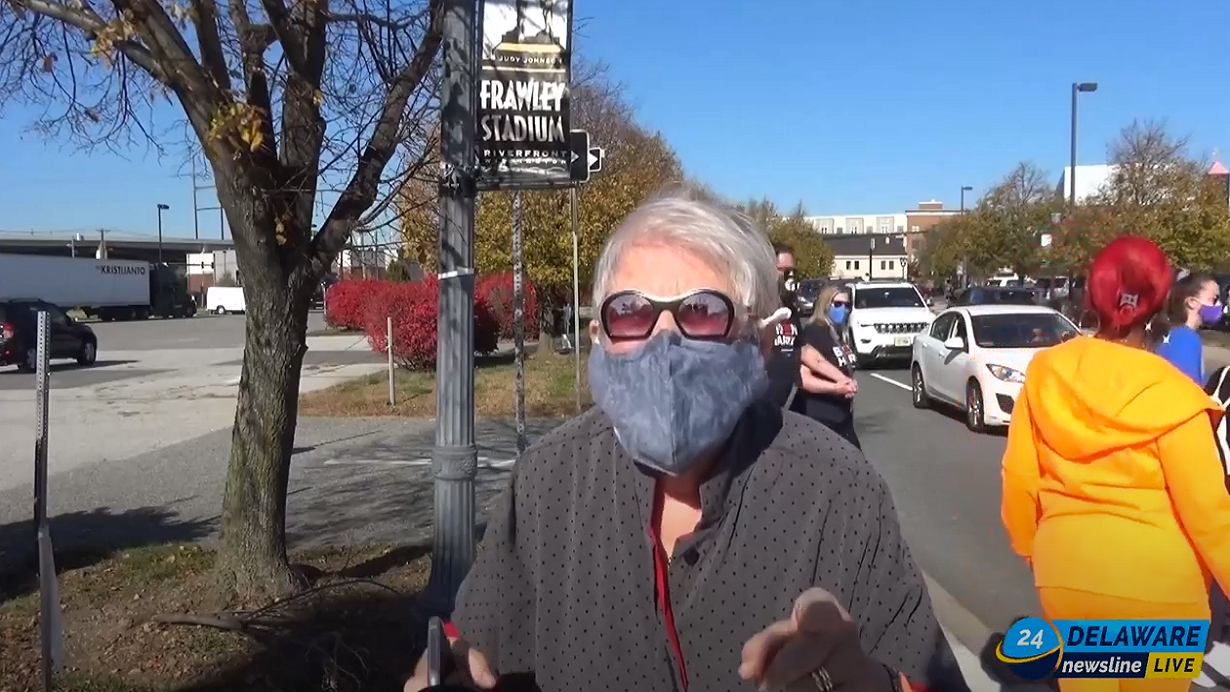 Although there was a Lack Of Social Distancing, almost everyone we saw was wearing a mask and occasionally using hand sanitizer.

Even though Delaware has reported more than 718 deaths and over 26,000 Coronavirus (COVID-19) infections since March 11, 2020, the celebrations went on in spite of a lack of social distancing, but almost everyone we saw was wearing masks at at the Soul Of The Nation celebration. Does that make the large group gathering without enforcement okay?

While enforcement might not of been possible due to the fact locals quickly responded to the announcement, responsible citizens should had been practicing the CDC guidelines for group gatherings.

The CDC recommends that if you do attend such a session, maintain as much distance as possible between yourself and other individuals, and use masks if they do not interfere with your activity. If you need to be indoors, open windows to increase airflow throughout the space. Use social distancing and limit physical contact.

“Maintain at least 6 feet of separation as much as possible in areas that may lead to close contact (within 6 feet) among other people, such as weight rooms, group fitness studios, pools and saunas, courts and fields, walking/running tracks, locker rooms, check-in areas, parking lots, and routes of entry and exit.”

“Don’t shake hands, give high-fives, do elbow bumps, or touch others because close contact increases the risk of acquiring COVID-19.”

The Biden and Harris Motorcade arrives for the second time in two days:

Traffic was diverted by Delaware State Police and Wilmington Police working together to make the route as safe as possible for both the President and Vice president-Elect. A handful of other law enforcement agencies also participated in the coordination of the safe motorcade route.

DELDOT also assisted in closing down roadways and streets that joined into the motorcade route. A lot of effort and manpower not to mention both in-field hours and planning hours had to be coordinated to ensure the motorcade had the safest and most effective route as possible.

Secret Service was scattered everywhere and a special fence was erected around the Chase Center as a security measure. A no-fly zone was established during the motorcade route and exists at Biden’s Greenville and Maryland homes. 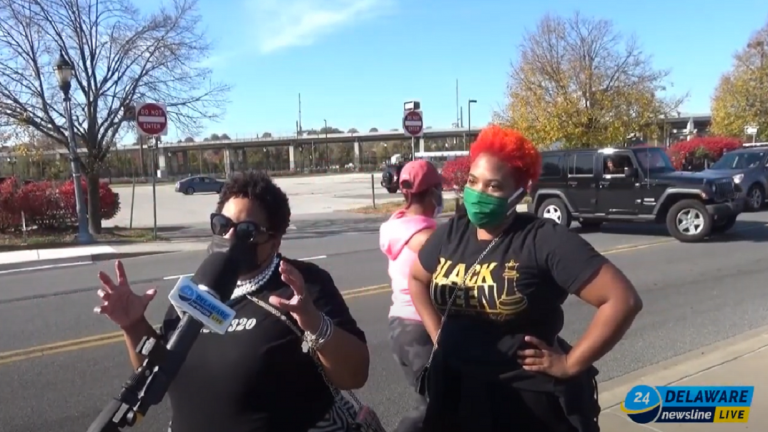 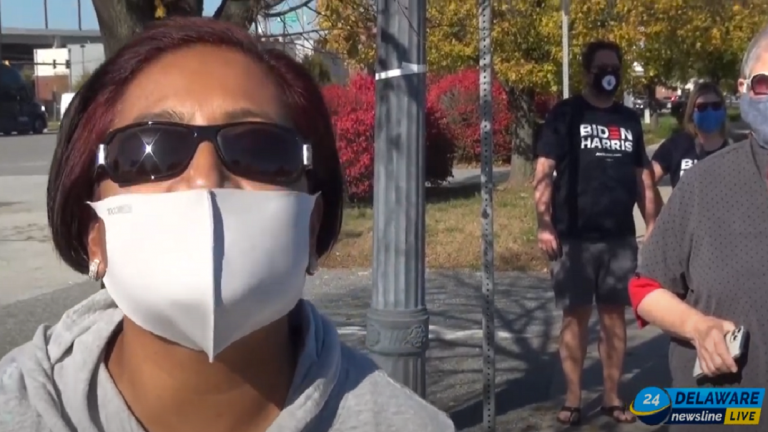 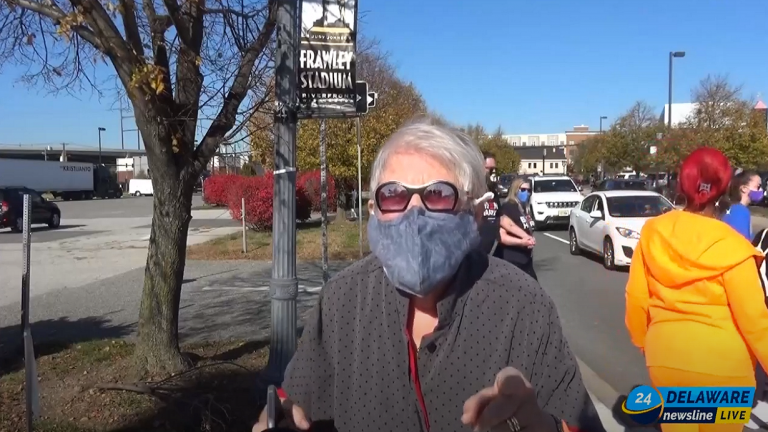 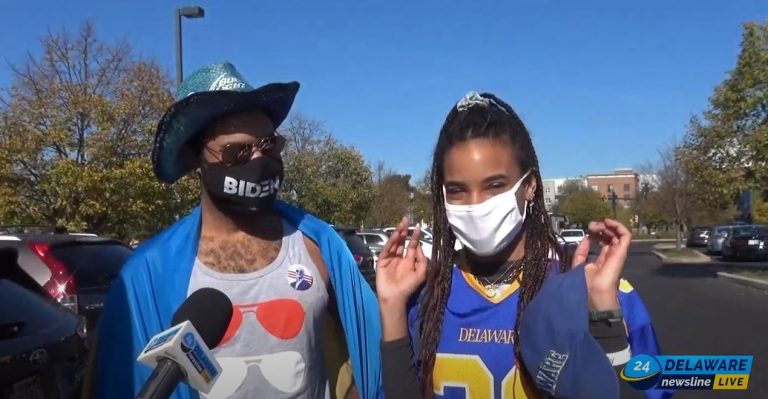 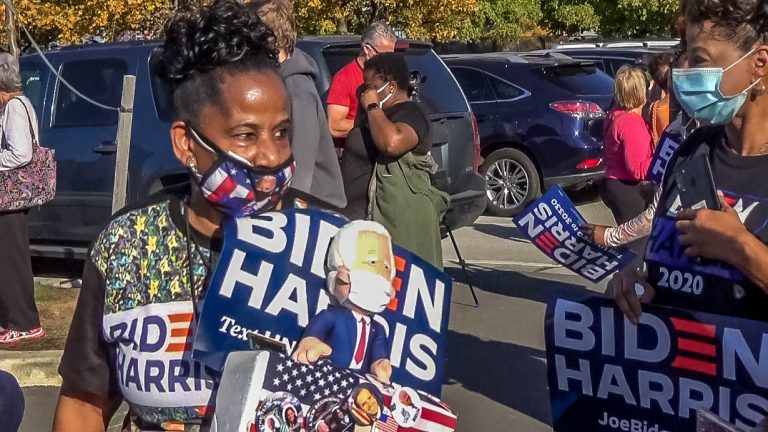 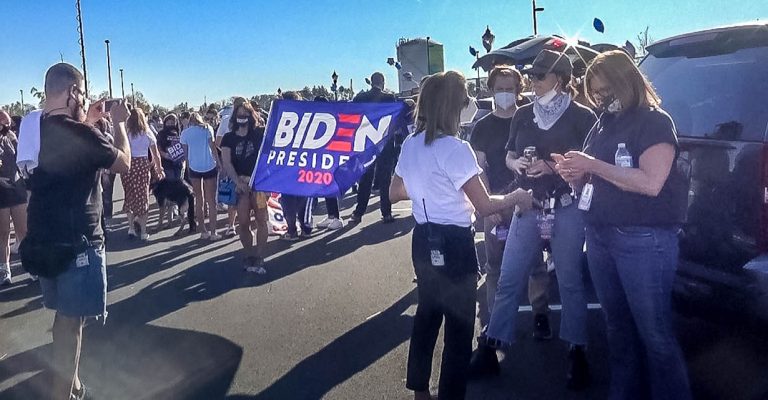 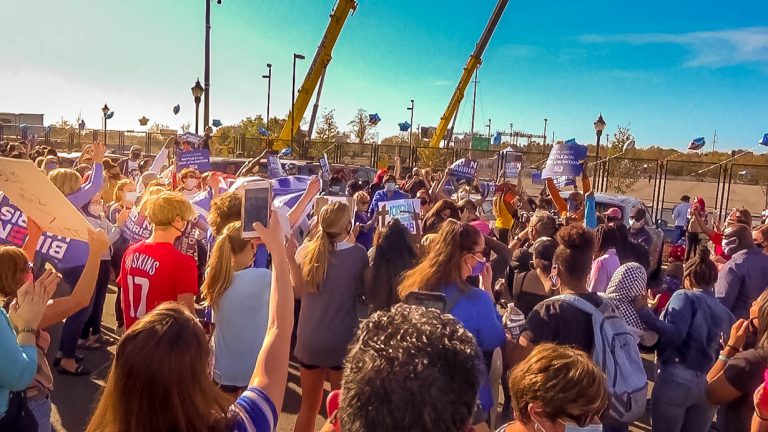 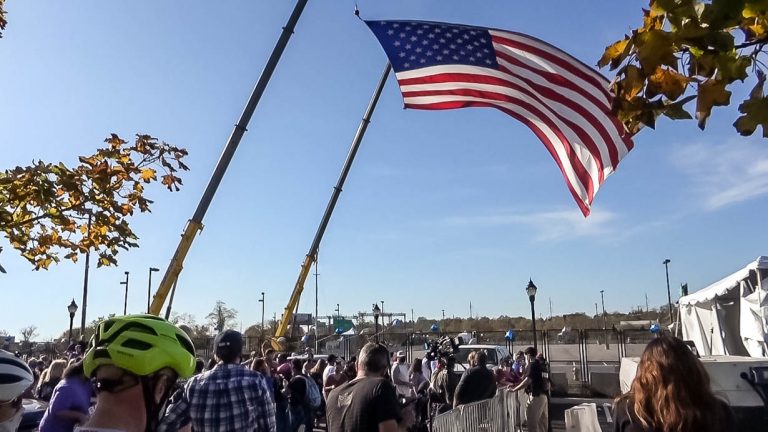 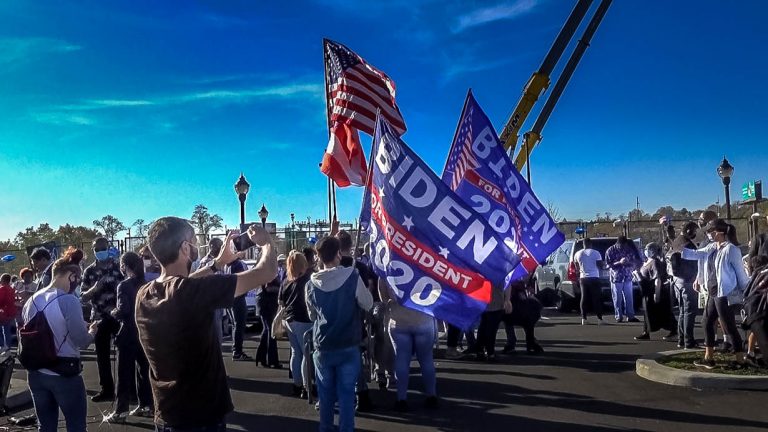 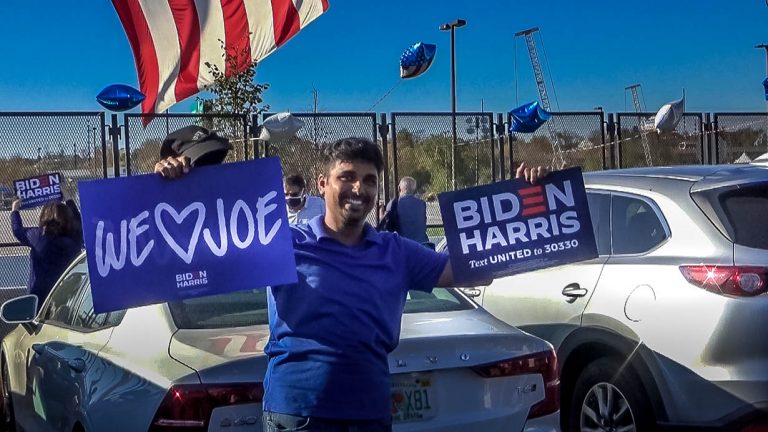 Tactical units with the Delaware national Guard and Delaware State Police along with multiple ambulances were on stand by at the 76ers Field House parking lot just outside the Wilmington Riverfront area.

Some of Delaware’s most prominent politicians joined in on the celebration later in the evening:

Delaware’s most prominent politicians attended the Soul Of The Nation Victory Speech later in the evening that including Wilmington Mayor Mike Purzycki, Governor John Carney, and Senator Thomas Carper.

“The eyes of the world are on President-elect Joe Biden and Vice-President-elect Kamala Harris as history is made in Wilmington, Delaware this day.,” Said Wilmington Mayor Mike Purzycki. “Wilmington—and indeed all of Delaware—is beaming with pride today.”

Governor John Carney weighed in on the historical event and said, “President-elect Joe Biden, as we know in Delaware, is a man of decency. Joe is uniquely suited for this moment. He can bring this country together. And he’s got the perfect partner in Vice President-elect Kamala Harris. This is a historic moment for Delaware and for our country.”

Former Governor Ruth Ann Miner and Delaware Attorney General Kathy Jennings were also at the event during the victory speech.

During the speech, President-Elect Joe Biden said “Our work begins with getting COVID under control.” 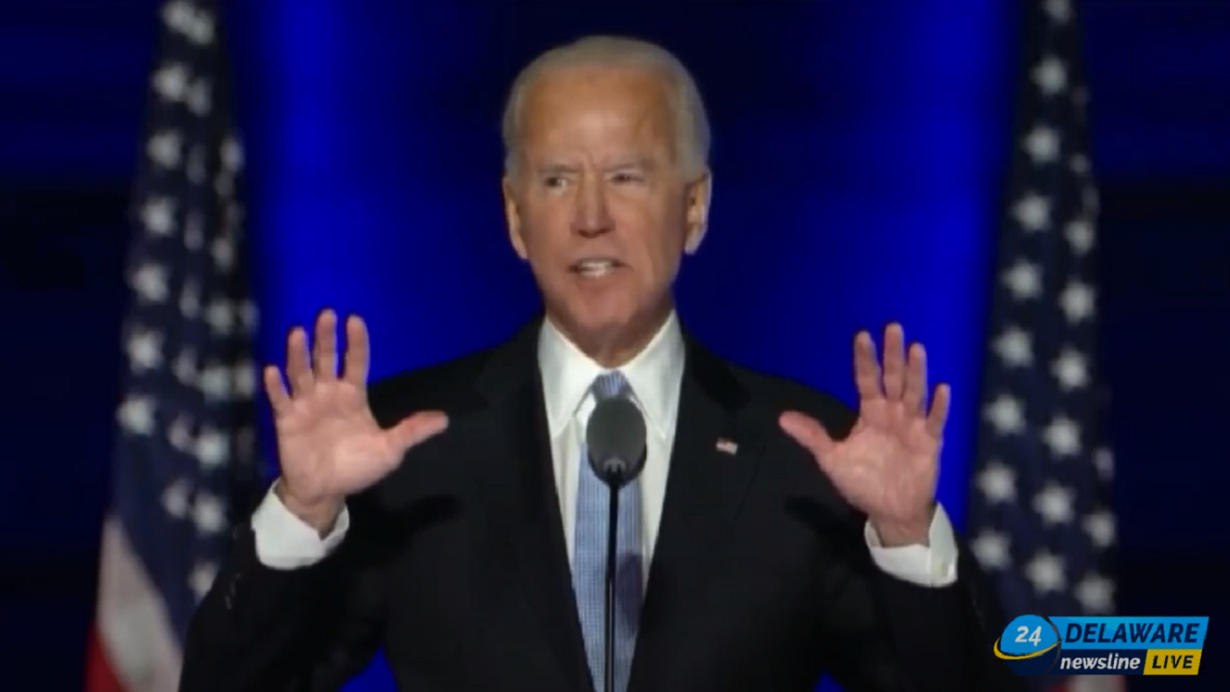 He said, “We cannot repair the economy, restore our vitality, or relish life’s most precious moments — hugging a grandchild, birthdays, weddings, graduations, all the moments that matter most to us — until we get this virus under control.”

He also pledged that “On Monday, I will name a group of leading scientists and experts as Transition Advisors to help take the Biden-Harris COVID plan and convert it into an action blueprint that starts on January 20th, 2021.”

“That plan will be built on a bedrock of science. It will be constructed out of compassion, empathy, and concern.,” Biden said. “I will spare no effort — or commitment — to turn this pandemic around.”