It’s April and April 22nd is Earth Day, which is right around the corner, and there couldn’t be a better time to get more involved in our environment, and these awesome students have been demonstrating exactly that.

NEW CASTLE (DE) BY PHOTOJOURNALIST GEORGE SHEA: 200 Pounds of trash, 100 pounds of recyclables, and 900 plastic pellets. That’s what these awesome Newark Charter High School students have been collecting at Deemers Beach in New Castle, and it was all collected on Saturday.

It’s April and April 22nd is Earth Day, which is right around the corner, and there couldn’t be a better time to get more involved in our environment, and these awesome students have been demonstrating exactly that. 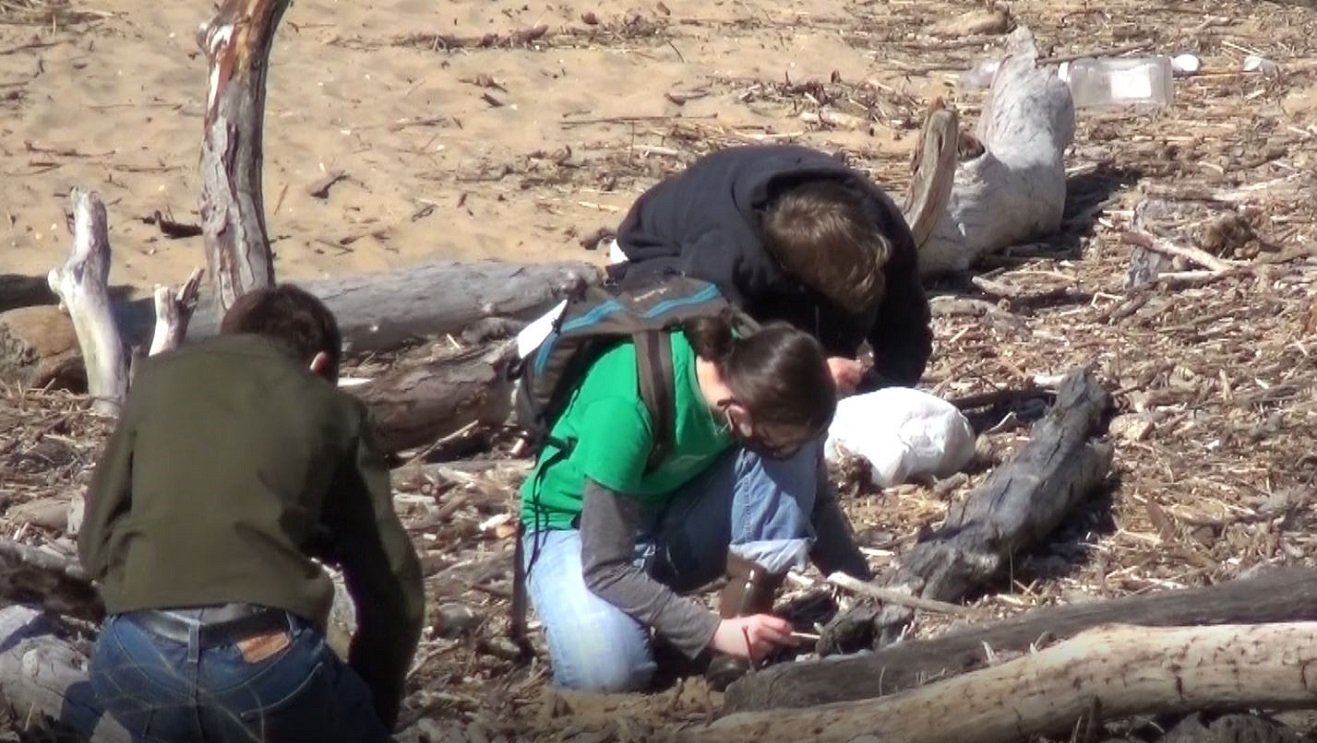 Photo by George Shea For Delaware Newsline | Newark Charter H.S. Students have collected over 200 pounds of trash at Deemers Beach – trash being left by it’s visitors.

Coming to Deemers Beach for more than a month, these students have been collecting trash – trash that’s being left every day by it’s visitors. Plastic bottles, glass bottles, plastic lawn chairs, kites, glass, and fishing string are just a few of the things being collected from this small beach.

I wanted to learn more about these students and the awesome work they have been doing so I caught up with Tami Lunsford, a Marine and Science teacher from Newark Charter High School. Lunsford was with her students on the beach Saturday collecting trash, recyclables, and plastic pellets. 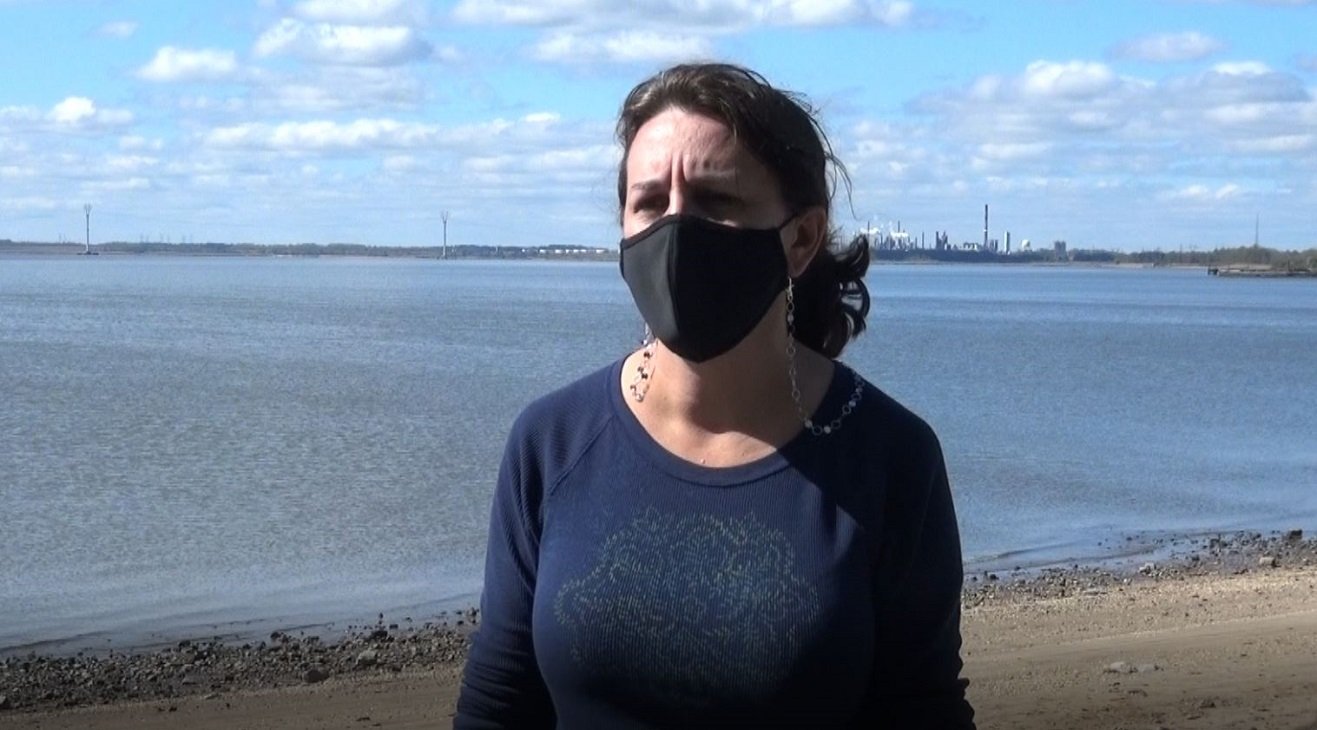 Lunsford is a Marine and Science teacher at Newark Charter H.S. She is also the advisor for the Marine Science Club. She explains that they are working with the University of Delaware, the Delaware Sea Grant, and also the Citizens Science project with the beach cleanup project.

“It’s remarkable, how many people seem to come here, eat here, drink, leave their things behind, or people seem to probably throw things off boats when they’re on the river.” | Tami Lunsford, Newark Charter HS Teacher

When asked about how long she has been involved with Marine Science and what the motivation behind such a field was, Lunsford said it all started for her when she was a student at Christiana High School.

I was an Environmental Science major, Biological sciences concentration, at UD. I earned my Master of Science from the Virginia Institute of Marine Science, College of William and Mary, in 2002, and I have taught HS, community college, university students, and teacher professional development since 2001.

As a student at Christiana High School, I was involved in the environmental club and learned about the impact pollution has on natural ecosystems and on human health…. so that was a huge motivating factor for me. The early 90s was a huge time of change here in Delaware for our environment, so the timing was powerful.

I was a UD faculty member when Newark Charter was opening the high school, and I came here and have never looked back. I am passionate about the ocean and life within it, but even more, I am passionate about leaving a positive mark on the world. I have been focused on empowering students to make a positive change in the world (whatever that means to each of them, based on what most motivates them).

Our student leaders in Marine Science Club and in my Project-Based Learning Marine Science course have really kept things moving with clean-ups and projects over the years to make a difference. Some of their work to advocate for change in the city of Newark resulted in bookmarks made by the Newark Conservation Advisory Commission that are now being distributed to encourage sustainable choices! 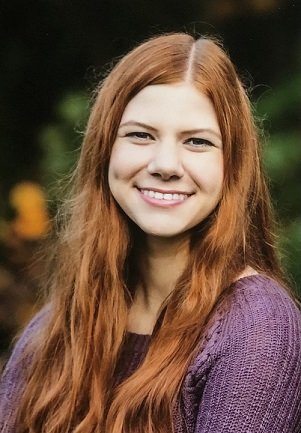 One of her students, Megan B., has been organizing this year’s trips. She said, “I feel like cleaning up the environment is one of the most important things that humans can do at this point. We have put so much pollution out into the world and killed countless animals in the process; it is time to restore the balance of the environment. All of the other life forms deserve a right to live just as humans do. Cleaning up the environment has given me a more cynical view on big corporations and places that use up lots of fossil fuels.”

“It makes me disappointed when people continue to pollute the environment, they live on this planet after all. It amazes me that they fail to grasp that they are destroying the only place where humans can live.” | Megan B., Newark Charter Student

The amount of trash being collected on this small strip of beach is astonishing and it’s all being collected by these students who are part of The Service Project. To date, the students have participated in 15 cleanup projects over the past three years.

Audrey B., another student who is part of the Service Project, hasn’t missed a single cleanup event.

“I think that cleaning up the environment is a really great thing to do for the Earth. I has also made me realize how much trash is around us everyday. For example, I always notice more garbage on the side of the road on the way from a clean-up than on the way to one.”

She added that “It makes me really sad to see all of that trash in the environment, especially when there are garbage cans not twenty feet away. It always makes me wonder what would have happened if nobody had picked it up before it got into the ocean.”

The students range from 7th to 12th grade and trash isn’t the only thing they’re collecting. They’re also collecting plastic pellets which are also known as Nurdles. The students are Handpicking them one by one, and placing them into vials that are then counted and submitted to an organization called Nurdle Patrol, who then tries to determine how many Nurdles are in the environment.

“I love cleaning up the environment! During the pandemic it has helped me get outside, but more importantly, it makes me feel as if I am making a positive impact on the world. Even in a small way, I like to help make the world a cleaner, better place.,” Said another Newark Charter student, Camille V.

She added, “When people leave their trash in our environment it makes me both angry and upset. I do not understand how some people could have so little respect for the world that we live in and that supports us. I believe it is our duty to take care of our environment, not endanger it.” 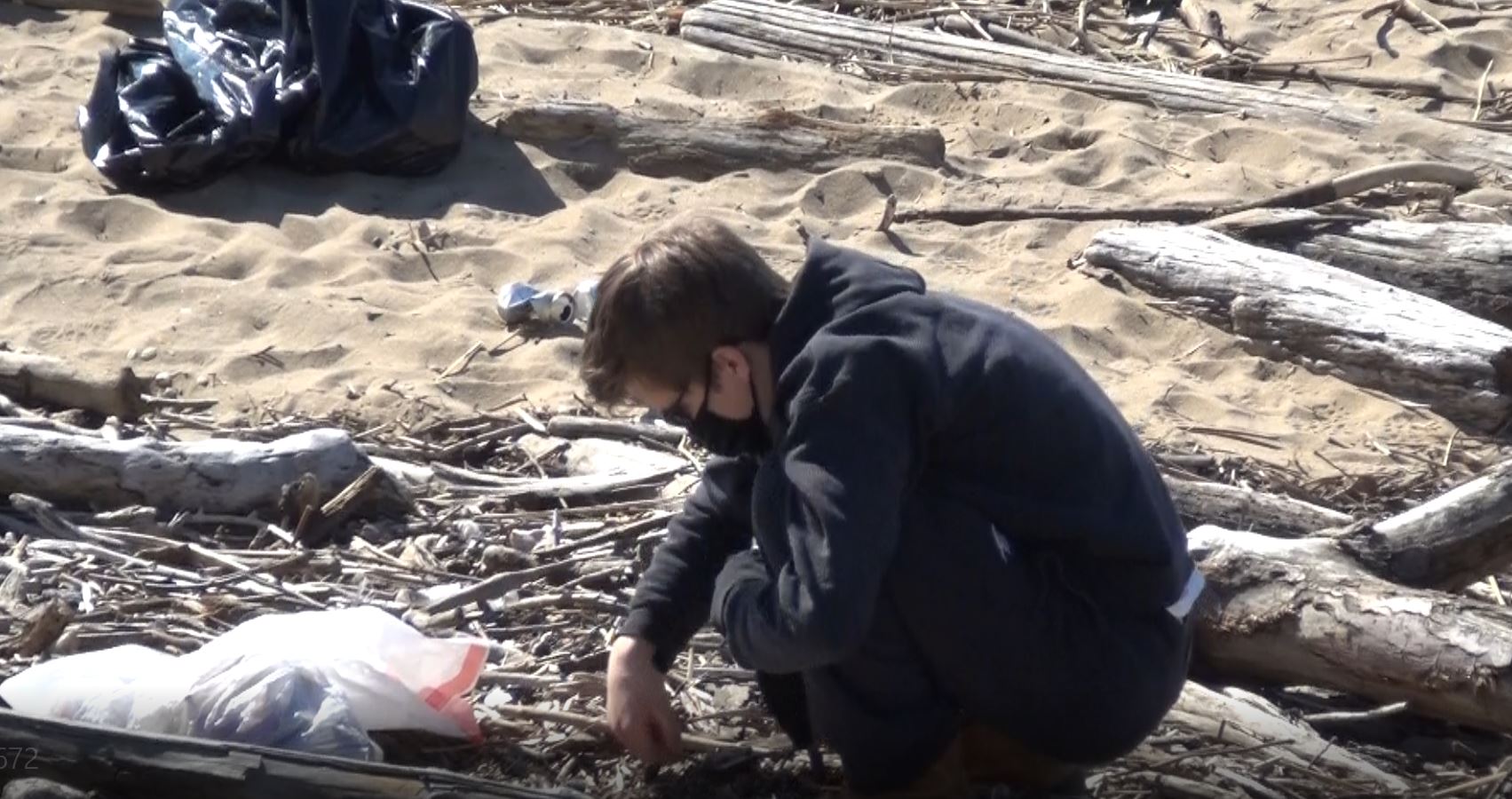 Photo by George Shea For Delaware Newsline | This Newark Charter Student is picking Nurdles which are made from plastics and harmful to the environment.

According to Nurdle Hunt, Nurdles are not safe for the environment.

“Pellets might also have indirect effects on ecosystems; on the beach, microplastics can change the characteristics of sand, such as its temperature and permeability, which can affect animals like sea turtles that incubate their eggs on beaches.”

They also say that once polluting our environment, they can pose a threat to these creatures and habitats for years to come.

More than 220 marine species have been shown to ingest plastic debris.

When consumed, the plastic nurdles can get trapped in stomachs, causing ulceration. Animals who consume nurdles, often feel full and neglect to eat real food which can lead to starvation and death.

Toxic chemicals can also transfer from microplastic to animals that eat them, causing further harm – another route for these chemicals to enter the food chain.

When spilt and not cleaned up, nurdles can find their way into our storm drains and are carried straight out to sea. In the sea they spread quickly and widely, and as a result can be found throughout the world, from the middle of the pacific to the arctic circle.

When asked what people can do when visiting Delaware’s beaches…

Camille V. said, “I would tell them to respect the beach and not to litter. It is such a beautiful part of our ecosystem and it would be a shame if future generations are not able to enjoy it due to our current actions.,”

Megan B. Said, “Throw your trash and recycling in the proper containers and pick up trash if you see it. Set aside time to pick up trash yourself or do clean ups with friends.”

Audrey B. said, To people who visit our beaches, I would just say to be aware of what you’re doing. When people litter in an area, they’re endangering every animal that lives there. I would also encourage people to spend an hour picking up a beach one day. Everything you do makes an impact, and you will never regret making a positive one.