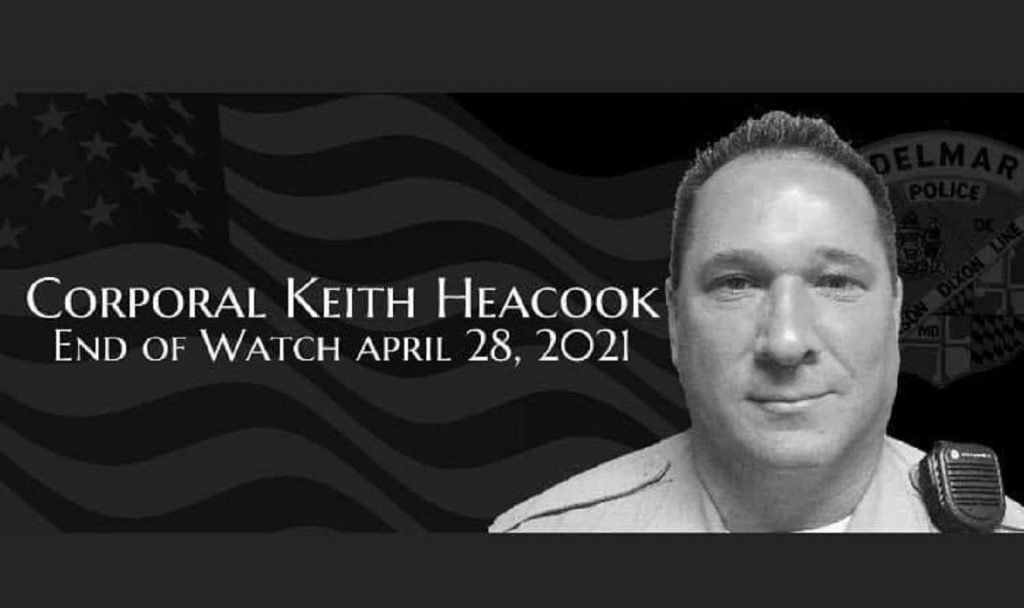 Three days after being attacked, Cpl. Keith Heacook, 54, was declared “clinically dead” Wednesday at 12:48 p.m. at a Baltimore hospital, according to Delmar Police Chief Ivan Barkley.

DELMAR (DE) BY DIGITAL STAFF: A Delmar police officer has been declared clinically dead three days after he was violently assaulted in a home he responded to for a fight in progress call.

“I need you to know that even with his sacrifice, he’s still a hero for someone. His family and the good corporal have graciously decided to donate his organs so someone else may live with his sacrifice. Our community, my department, his family, we all mourn him,” said Chief Barkley at a news conference Wednesday night at the Delmar Police Department.

A spokesperson with Tidalhealth said, “In this time of great tragedy and sorrow, we thank Corporal Heacook and his family for their great courage and their compassion shown to others through the donation of the law enforcement veteran’s organs.”

“From this senseless act will come hope for others. It is the greatest gift from a man who spent his life protecting the lives of others.”

“Unfortunately I just had to tell my 12 year old son that he will never see his father again .. he crumpled up into a ball on the floor crying his eyes out,” “He was simply doing the job he so loved to do – to protect and serve” | Wife of Cpl. Keith Heacock.

It all happened in the early morning hours on Sunday April 25, 2021 when Heacock, an officer with the Delmar Police Department was dispatched to the 11000 block of Buckingham Drive in the Yorkshire Estates Community for a report of a fight in progress.

The 9-1-1 caller reported one of the occupants, who was later identified as Randon Wilkerson, was being disorderly, fighting with other residents in the house, and destroying items inside the residence.

However, the caller then stated the assailant was no longer at his house. That was because police say, Wilkerson, was across the street assaulting an elderly couple in their home.

Police said a separate 9-1-1 call was received from the couple, who was identified as Steve and Judy Franklin, stating he and his wife had been assaulted by a male subject.

According to Delaware State Police, Corporal Keith Heacook was met with a physical confrontation with the suspect inside the home just after 5:00 a.m.

When Heacock wouldn’t respond to dispatchers with a status report, back-up officers were dispatched and a Wicomico County Sheriffs Office Deputy and a Delaware State Trooper arrived on scene to find Cpl. Heacook unconscious inside the residence.

“Officers from Laurel Police Department arrived on scene, and upon pulling Cpl. Heacook from the house, began First Aid until Emergency Medical Services (EMS) arrived. Cpl. Heacook was transported to TidalHeath in Salisbury and then given a police escort to Shock Trauma in Baltimore with significant head injuries.” | Gary Fournier, Delaware State Police Spokesman.

Police say after assaulting Heacock, the suspect, later identified as 30-year-old Randon D. Wilkerson, then went across to the street to an elderly couples home and knocked on the back door of the residence. The door was opened by 73-Year-Old Steve Franklin, who was then assaulted by the suspect about the head with a glass object. Police say Wilkerson then repeatedly assaulted his 76-year-old wife, Judy Franklin with the same object before fleeing the house.

Both of those victims sustained significant injury and were transported by ambulance to area hospitals. The female victim was later transported to Shock Trauma in Baltimore., police said.

While police continued investigating the crime scene, the suspect was observed by allied police agencies walking on the rear of the property where Heacock was assaulted, and was taken into custody without incident.

Wilkerson was transported to Troop 5 in Bridgeville and charged with Attempted Murder 1st, Assault 1st (2 counts), Possession of a Deadly Weapon During the Commission of a Felony (2 counts), Burglary 1st, Assault 3rd, and Terroristic Threatening.

Wilkerson was later arraigned at Justice of the Peace Court 3 and committed to Sussex Correctional Institution on $451,000.00 cash bond.

Gary Fournier, a Delaware State Police spokesman said his agency is continuing the investigation into both events and is working collaboratively with the Delmar Police Department, Wicomico County Sheriffs Office, Maryland State Police, and all other involved agencies.

Delaware Attorney General Kathy Jennings reflected on the death of Heacock, saying, “his killer’s charges will be upgraded to include murder”

“The man who stole him from his family and from his community has been arrested, and mark my words: he will be prosecuted to the fullest extent of the law. It is with nothing but sadness that I commit, now that Cpl. Heacook is no longer with us, that his killer’s charges will be upgraded to include murder.,” Attorney General Kathy Jennings.

Jennings added, “He will be held accountable for his heinous crimes against Cpl. Heacook, against the elderly couple he viciously assaulted, and against Delmar and our state., the DOJ has been working together with Delmar and Delaware State Police, and all are doing everything in our power to ensure a successful prosecution.”

The Humane Society of Wicomico County has set up a Go Fund me page for the two elderly victims, Steve and Judy Franklin, who are big volunteers at their facility.

“Steve & Judy are a huge part of our HSWC family and Steve spends a few hours walking our dogs several days a week. Steve is truly a dedicated volunteer at our shelter, loves each dog as if they were is own and always shows up no matter the weather.,” Said a spokesperson at the Humane Society of Wicomico County.
While Steve and Judy recovers in separate hospitals, the staff at the Humane Society will be caring for their five dogs.

Although, the society opened a bank account named “The Community” at Bank of Delmarva for Cpl Heacock and his family, there has been concern regarding their use of Go Fund Me as a platform to raise money for their family.

The society responded by saying “As a non-profit, the Humane Society of Wicomico County uses Go Fund Me Charity. The only fees that are charged are the standard credit card processing fees. The rest will go directly toward any medical bills, supplies for their dogs, and anything else their family needs. We want to make this fundraiser as simple as possible for those wanting to contribute.”

The last Delaware Law Enforcement Officer killed while on duty was in April 26, 2017.  That was exactly four years ago. CPL. Stephen Ballard was shot and killed on April 26, 2017 after he approached a suspicious vehicle in the parking lot of a Wawa gas-station in Bear. After asking the driver and passenger in the car for identification, Ballard asked the passenger to step out of the car. The passenger, Burgon Sealy Jr., got into a struggle with Ballard, then began shooting at him. When Ballard who was unable to draw his weapon in time, attempted to find cover from Sealy, Sealy pursued and continued to shoot, hitting Ballard multiple times in the upper body and continuing to shoot even after the officer fell to the ground.

On Sunday night, hundreds showed up at a vigil for the officer at the Delmar Police Department and as of Monday morning, the society has raised over $12,000. That’s $2,000. greater than the actual $10,000 goal. You can learn more about donating to help the victims here

“This is heartbreaking news. The Delmar community and the entire State of Delaware lost a public servant today. Tracey and I are praying for Cpl. Heacook, his family, and all of his fellow law enforcement officers.,” | Governor John Carney 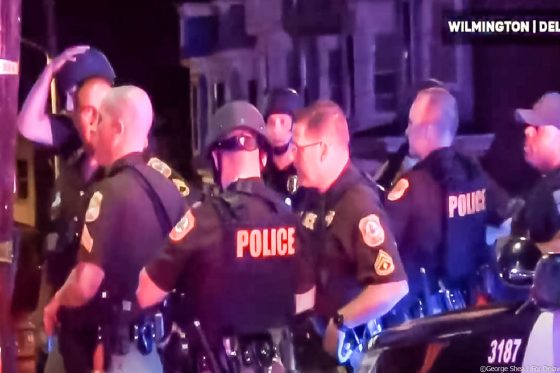 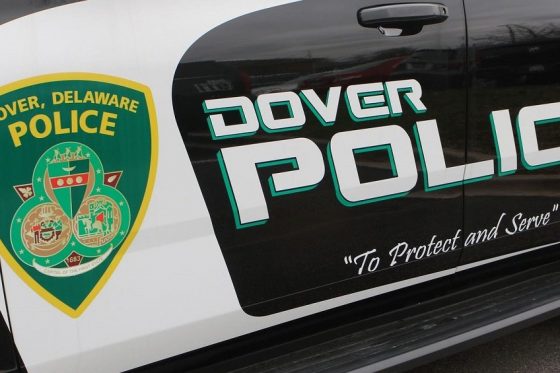