Westville Road, between Tower Road and Sandy Bend Road, was closed for approximately three and a half hours while the collision was investigated and cleared.

CAMDEN-WYOMING (DE) BY DIGITAL STAFF: Delaware State Police are investigating after man was struck and killed by a vehicle as he cut grass in front of his home.

Police say a 74-Year-Old Camden-Wyoming man was cutting his grass near the roadway in the 4000 block of Westville Road when he was struck and killed Saturday just before 8:00 p.m.

At the time the man was struck, he was mowing the grass in a ditch about six feet from the roadway police said. 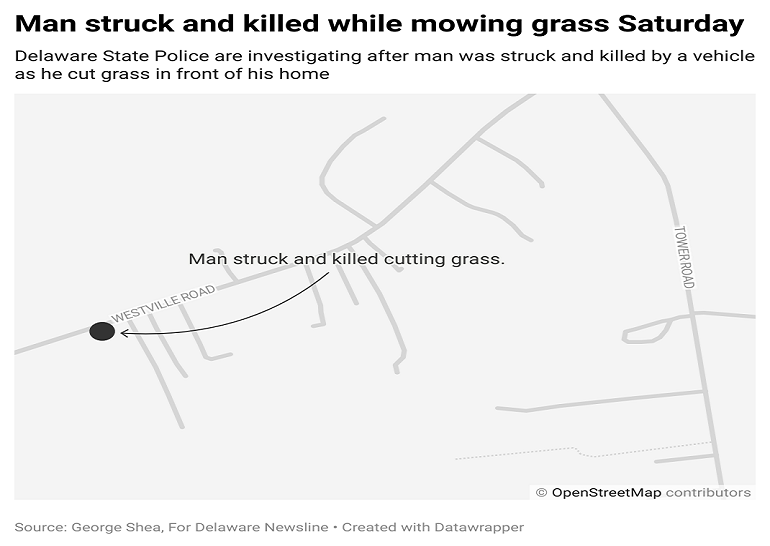 Police said, it was then that a 2008 Hyundai Santa Fe, was traveling westbound on Westville Road drove off the north side of the roadway, entered the grassy shoulder and swale, striking a small culvert pipe, before crossing the victim’s private driveway.

The Camden-Wyoming man, who was standing/walking behind his push lawnmower, was then struck by the Santa Fe and thrown in a westerly direction, police said.

The Santa Fe, which was being operated by a 59-year-old female from Camden, also continued in a westerly direction and overturned, pinning the 74-year-old man underneath.

The 74-year-old male was transported by EMS to Bayhealth Kent General where he was pronounced dead. He was identified Monday as 74-year-old Thomas J. Stubbs of Camden-Wyoming.

The 59-year-old female was properly restrained and was treated on scene by EMS for minor injuries and released.

Westville Road, between Tower Road and Sandy Bend Road, was closed for approximately three and a half hours while the collision was investigated and cleared.

The crash remains under investigation by the Delaware State Police Troop 3 Collision Reconstruction Unit. No charges have been filed at this time. Anyone with information regarding this incident should contact Sgt. J. Wheatley by calling 302-698-8518. Information may also be provided by calling Delaware Crime Stoppers at 1-800-TIP-3333 or via the internet at http://www.delaware.crimestoppersweb.com.