Governor Carney: “We can do great things if we work together, and this legislation shows that we are moving forward productively.”

NEWARK (DE) BY GEORGE SHEA: It was an exciting day for not only law enforcement but also the communities in which they serve as Governor John Carney signed legislation requiring police officers and certain employees of the Department of Correction and the Department of Services for Children, Youth, and Their Families to wear and use a body camera.

The signing of the bill happened Wednesday morning at Delaware State Police Troop 2 in Newark. Carney was joined by members of law enforcement, advocates and members of the General Assembly during the bill signing.

Body cameras will be used to record interactions with members of the public in accordance with the regulations that will be established by the Council on Police Training. Governor Carney supported this proposal in his 2021 State of the state address.

“Here in Delaware, we look out for each other because we care for our neighbors,” said Governor Carney. “We can do great things if we work together, and this legislation shows that we are moving forward productively. Thank you to the members of the General Assembly and the Delaware Black Caucus, Attorney General Jennings, advocates and law enforcement for your leadership on this important piece of legislation.”

This Act requires state agencies to implement the statewide body camera program through the procurement of cameras, development of a central data storage program, and provision of necessary personnel. Governor Carney’s Fiscal Year 2022 budget includes $3.6 million for the development and deployment of body cameras. 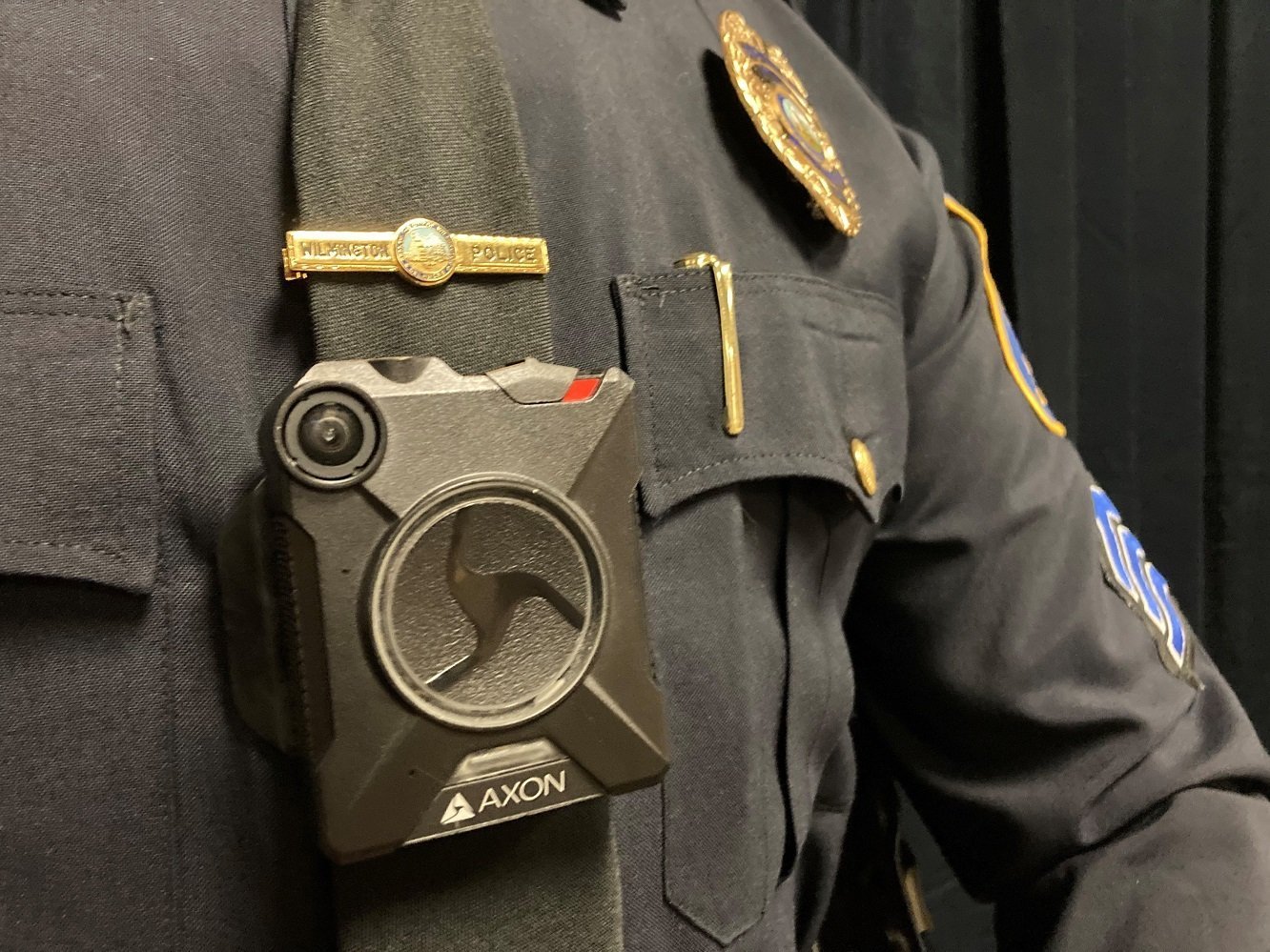 “Body-worn cameras have the ability to be a game-changer in police-community relations. They greatly improve transparency and accountability, while providing increased protection for both the police and the community,” said Representative Sherry Dorsey Walker. “There is a reason that law enforcement, community members, and lawmakers all have advocated for universal body camera usage throughout our state, and we are seeing the result of that collaborative effort here today. This is a part of the Delaware Legislative Black Caucus’ Justice for All Agenda, and I’m very grateful to see it come to fruition.”

“The Delaware Legislative Black Caucus made a commitment last summer to advance legislation that improves transparency and accountability in policing,” said Senator Darius Brown. “This legislation helps to do both, and I thank Governor Carney for signing this bill into law today.”

“This is a good day for accountability,” said Attorney General Jennings. “Everyone in this state — advocates, police, prosecutors, and the public — agrees that body cameras are good for transparency, good for trust, and good for justice. We worked hard for more than a year to design this program and I am eternally grateful to the advocates who called for change, to the legislators who took up the cause, to the Governor who ensured the initiative was funded, and to the police leaders who worked to get this legislation across the finish line.” 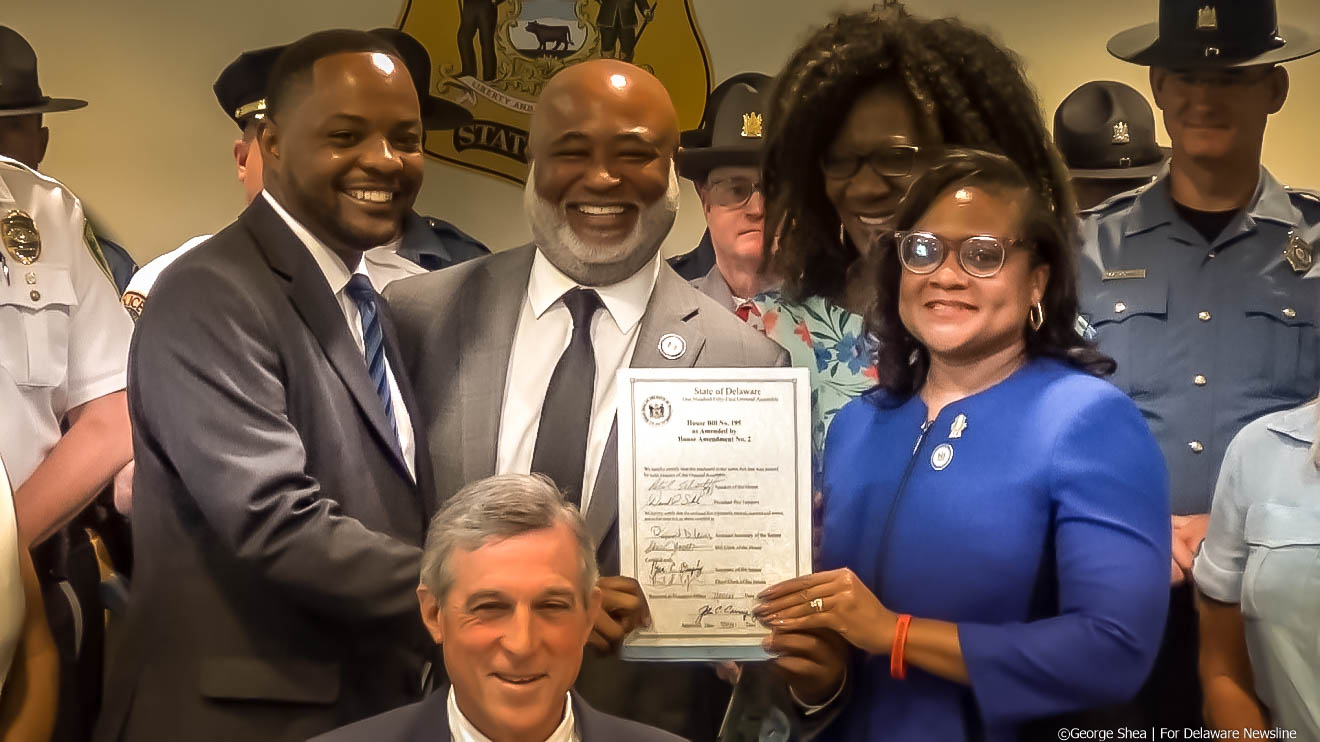 Photo: George Shea, for Delaware Newsline | It was an exciting day for not only law enforcement but also the communities in which they serve as Governor John Carney signed legislation requiring police officers and certain employees of the Department of Correction and the Department of Services for Children, Youth, and Their Families to wear and use a body camera.

“While there is still work to be done, the signage of this legislation is the next step in our States continuing efforts to promote accountability, transparency, and legitimacy,” said Secretary McQueen of the Delaware Department of Safety and Homeland Security. “It will also enable Delaware Law Enforcement to continue to build trust and foster positive relationships within our communities.

“The FOP is appreciative for the opportunity to be a part the discussions surrounding this legislation,” said Lt. Jamie Leonard, President of the Delaware State F.O.P. Lodge. “We wholeheartedly agree that body cameras will help increase transparency and accountability for our police officers and the public we serve. We would like to thank the Sponsors of this legislation, and all the members of the General Assembly, for ensuring this bill’s passage. The FOP recognizes the financial burden this legislation could have placed upon many towns and municipalities therefore, we are thankful to Governor Carney for making the funding of this initiative a priority. We look forward to working with all the stakeholders as we join efforts to create a model policy which benefits all Delawareans, citizens and police officers alike.”