The Dover Police Department added a four-legged friend to their agency and it’s not your typical K9 officer.

Established in 1975, Canine Companions is the largest non-profit provider of service dogs in the United States.  Their presence in Delaware isn’t limited to the New Castle County and Dover Police Departments.  The University of Delaware hosts the largest collegiate puppy raising program in the Canine Companion organization, with anywhere from 5-9 dogs being raised on campus at any time.

Roy, who is named after Roy Gold, a late volunteer with Canine Companions, was matched with PFC Lee Killen during a two-week training program in Long Island, New York after being raised in New Hampshire.  Officer Killen and Roy will be assigned to the Dover Police Department’s Community Policing Unit.  Roy’s primary role with the department will be to serve as an ambassador for the department, attending community outreach events, meetings, school visits, and used to help calm and comfort crime victims, witnesses, and anyone else who may be afraid, uncomfortable, or nervous during a situation.  In the short time that Roy has been with the Dover Police Department, he has already become the most popular officer in the building. 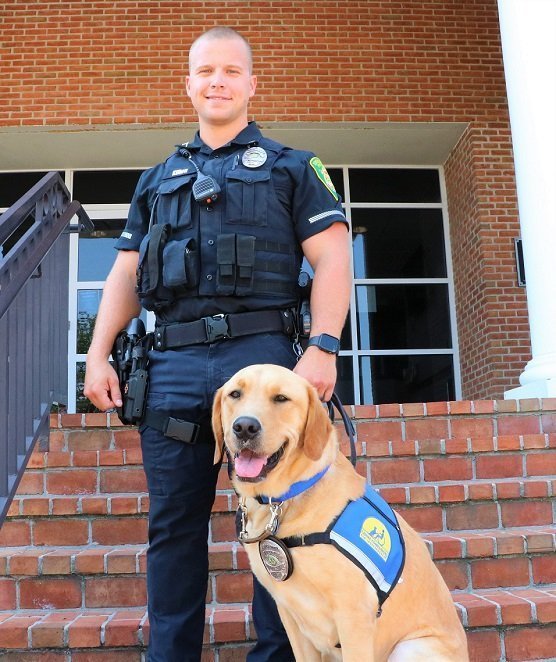 Photo courtesy of Dover Police Department | Roy, who is named after Roy Gold, a late volunteer with Canine Companions, was matched with PFC Lee Killen during a two-week training program in Long Island, New York after being raised in New Hampshire.

Chief Thomas Johnson made the following statement regarding Roy’s arrival:  “Like every other member of the Dover PD team, Roy is a highly trained professional with a love for service. He has a skill set beyond comfort and therapy, and clearly different from our other working dogs.  This makes him a perfect addition to our Community Policing mission.  He has something to offer everyone, but perhaps his most valuable skill is getting people together in moments filled with positivity.  He will make Dover even stronger than it already is.  Welcome aboard Roy!”

Roy and his handler was at the Dover Police Department’s National Night Out on August 3rd, 2021 at the Dover High School where the public met him at his first large community event.

Following a surge of cases, testing guidelines updated for the unvaccinated

Unvaccinated Delawareans now account for 99% of the COVID-19 cases