During the investigation, investigators say it was discovered that the crash had actually occurred on June 21st at 11:21 p.m. but the first call to police did not occur until 4:17 a.m., nearly a 5 hour delay.

DOVER (DE) DNTV: Police investigators say they have made an arrest on arrest in connection with the discovery of a body, later identified as Jorge Valladares (30), in the Saint Jones River on July 2nd, 2022.

During the investigation, investigators say information was obtained that Valladares’ death was possibly the result of a motor vehicle accident.

According to earlier police reports, on June 22nd, 2022, officers from the Dover Police Department responded to East Water Street for a single vehicle crash that was approximately 225 feet off the roadway at 4:17 a.m. Police arrived and located a red 2013 Jeep Wrangler.

While investigating the crash, patrol officers say the driver and a passenger provided conflicting information about the crash, to include the number of persons in the vehicle at the time of the crash, ultimately telling officers there were only two people inside the car. Officers checked the surrounding area and did not locate any additional evidence or persons., investigators say.

Meanwhile, at the crash site, both the driver (Luis Coello, 30) and the 41-year-old male passenger were both transported to Bayhealth Kent Campus for treatment of non-life threatening injuries from the crash. 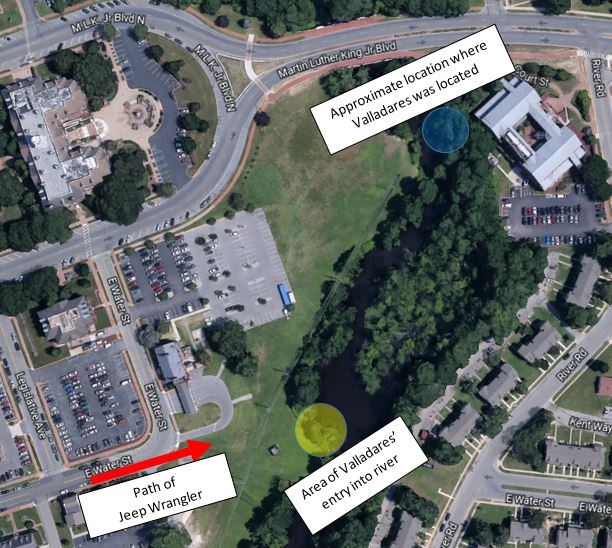 During the investigation, investigators say it was discovered that the crash had actually occurred on June 21st at 11:21 p.m. but the first call to police did not occur until 4:17 a.m., nearly a 5 hour delay.

“A review of evidence obtained from the vehicle and surveillance footage from nearby businesses showed that the Jeep Wrangler was traveling eastbound on Water Street, approaching a sharp left curve (in front of Del-One Federal Credit Union).,” Said Dover Police Spokesman Mark Hoffman. “The Jeep did not brake and drove over the curb, traveled down an embankment, turning over multiple times.”

Hoffman also said that “Evidence obtained from the vehicle shows that none of the three occupants were wearing seatbelts.”

Investigators believe that Valladares was ejected from the vehicle and landed in the Saint Jones River. Autopsy results show that Valladares’ had traumatic head injuries as a result of the crash.

During the 5-hours between the crash and the first notification to police, Valladares’ body moved a significant distance as the result of the river’s current. Valladares’ body was located on July 2nd by a group of kayakers, approximately 197 meters from where he likely entered the river.

At no point in the investigation did the driver or passenger of the vehicle advised police that Valladares was also in the vehicle., police said.

During the initial crash investigation, Cuello (30) was charged with Driving Under the Influence and additional traffic offenses.

As a result of the investigation following the discovery of Valladares’ body, Cuello was also charged with Vehicular Homicide 2nd Degree. Cuello was arrested in Newark without incident and committed to Sussex Correctional Institution on a $7,000 secured bond.

If you or someone you know is a victim or witness of crime or have lost a loved one to a sudden death and are in need of assistance, the Dover Police Victim Services Unit is available to provide help and guidance.  You can contact the Victim Services Unit at 302-736-7134 or by email at: Diane.Glenn@cj.state.de.us